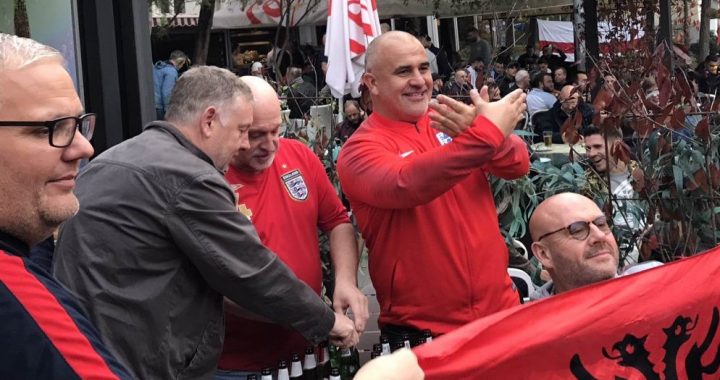 Winning friends if not matches

Kosovo’s final two matches of the year end in defeat, but the home game with England provides an opportunity to celebrate the progress Kosovo football has made and express gratitude for the UK’s role in it.

While results on Thursday night meant that Kosovo’s clash with England in Prishtina on Sunday would have no impact on the final standings in Group A for qualification to the 2020 UEFA European Championship, the atmosphere in the stadium and around the capital all weekend made it clear that the match was anything but a non-event.

Since the draw for the group was made last year, the fixture was seen as an opportunity to express gratitude for the UK’s role in the liberation of Kosovo in 1999, and take stock of how far the country has come since the days when Englishmen were visiting as soldiers rather than as football players and supporters.

Prishtina was decked out with the flags of both Kosovo and England and the players were greeted with flowers at the airport upon their arrival on Saturday night. Speaking after the game, England manager Gareth Southgate described the reception as “amazing.” “To experience it was very special,” he added. “It was more than just a match here, and we’re very proud to be a part of it.”

Fans also sang songs together in bars across the city throughout the weekend, with many stories of friendship between the supporters and the stunned reactions of English fans to the hospitality they received appearing in the Kosovo media over the past few days. The message of “welcome and respect” to the visiting team and their supporters extended inside the stadium, with reversible cards displaying each country’s flag on either side, shown during the playing of the two countries’ national anthems preceding the game.

The significance of the match has often been expressed through a single image; a photo of a British soldier playing football with young Kosovars in Prishtina’s Dardania neighborhood in 1999. Twenty years later, Kosovo’s men’s national team competed with former world cup winners England as a member of UEFA and FIFA.

For the first half an hour Kosovo did more than compete. Having already sewn up top spot in the group, England began the match in a lackadaisical manner, and both Atdhe Nuhiu and Milot Rashica nearly sent the crowd into raptures with early shots on goal, Nuhiu’s header forcing a good save from England goalkeeper Nick Pope.

But in the 32nd minute, Harry Winks, England’s most impressive performer in the first half, gave the away side the lead. A neat interchange with Alex Oxlade-Chamberlain left Winks with the time and space to pick his spot and roll the ball past Kosovo goalkeeper Arijanet Muric to give England the lead at the half time break.

Kosovo started the second half well, with Amir Rrahmani having two opportunities to find an equalizer for the home team. Wearing the captain’s armband in the absence of Vedat Muriqi, Rrahmani had a far better game than in his previous encounter with England, when Raheem Sterling embarrassed the center back on multiple occasions. This time round, Rrahmani got the better of the personal duel between the two, with the Manchester City forward struggling to make an impact on the game.

Despite the atmosphere in the stadium remaining buoyant throughout, the football played on the pitch failed to live up to the occasion for most of the second half, with neither team reaching the often thrilling standards they have set throughout this qualification campaign. As Kosovo tired late in the game, a flurry of late England goals from Harry Kane, Marcus Rashford and Mason Mount punctuated the final ten minutes, leaving the final score standing at a slightly unjust 0-4.

Losses in both of their last two matches leave Kosovo third in the group on 11 points in the final standings, after three wins, two draws, and three defeats. However, Kosovo’s performance in the UEFA Nations League last year mean that they have a second opportunity to qualify for the European Championship next summer. They enter a play off tournament with North Macedonia, Georgia and Belarus in March, with only one team able to secure a place at the championship.

After the game, Kosovo head coach Bernard Challandes played down expectations, stating that the play offs were not for a few months, and that many of Kosovo’s players playing in Scandanavian leagues would not play much football in the intermittent period. But while performances November’s matches did not reach the highs of those in September and October, Kosovo’s showing in this qualification campaign suggests that the side have a good chance in the tournament.

“It was a very good campaign but we must progress, we must learn,” the coach asserted. “England have played 1,001 games, Kosovo have played 30. The Kosovo people have suffered – they know why we have Kosovo, why we play football as Kosovo players. The players cannot disappoint. Everybody wants to support this team. Everybody is proud of this team.”