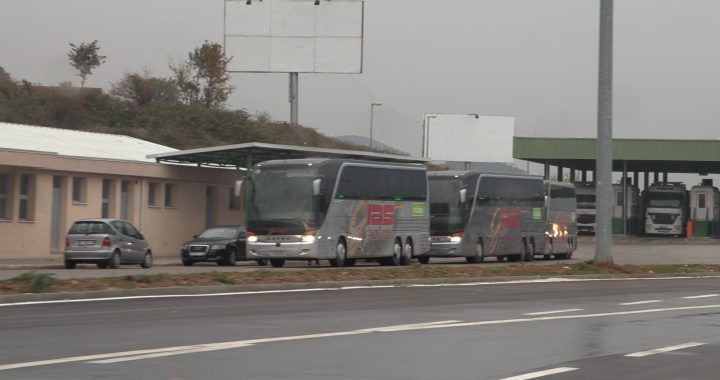 A BIRN investigation at the Muriqan-Sokobin border, used by Kosovars to travel between Prishtina and Ulqin, has discovered widespread bribery and misconduct of border officials in Montenegro, with Kosovo bus drivers expected to pay 30 euros to police for a roundtrip.

Bus companies driving passengers from Kosovo then through Albania and Montenegro, a popular route through the Muriqan-Sokobin border crossing taking Kosovars from Prishtina to Ulqin, are regularly required to pay bribes to the police in order to pass the border without difficulty. Drivers are expected to slip around 10-15 euros per crossing inside their travel documents as they attempt to continue past the border.

In the latest episode of BIRN’s televised program Drejtesia ne Kosove, or Justice in Kosovo, Kallxo’s team used hidden cameras during some of the route’s busiest months, June and July, to capture numerous instances of border police in Montenegro and Albania on film taking bribes from bus companies using the crossing on a daily basis.

“You need to have 30 euros in order to do a roundtrip from Kosovo to Ulqin,” one of the drivers said to Kallxo journalists, explaining that such bribes are necessary to ensure they do not experience any problems from the border police.

According to drivers, if they refuse to give the money, their buses can experience significant delays and extended searches of the passenger’s luggage and the bus itself, and bribes tend to ensure that this process goes ahead as swiftly as possible.

Kallxo traveled four times between the border crossing of Muriqan-Sukobine to verify the claims of the bus drivers. In all four cases, money exchanged hands between the drivers and officers at the border.

The allegations of bribery were not denied by Montenegrin state authorities.

Vesko Damjanovic, the assistant director of the Montenegrin Police, told  BIRN that the results of Kallxo’s investigation were “news” to him, but admitted that bribery remains to be an issue. “Yes, we have had some cases involving misconduct by our officials, where money was demanded,” confirmed Damjanovic.

Damjanovic explained that hidden cameras were installed in 2018 in each of the cabins operating at the border. “The aim [of installing the cameras] is to follow the work of officers and to serve as a measure against corruption,” he said.

When asked whether they are able to identify bribery between drivers and border officials from their own cameras, Damjanovic replied, “It depends on the positioning of the travel documents.”

The deputy commander promised “undertake the needed measures and actions” in response. “If this phenomena exists, it needs to be uprooted from our side,” said Damjanovic, stressing that bus drivers and police can both be held responsible.

According to the European Commission’s progress report on Montenegro published in May 2019, there has been “limited progress” overall in the fight against corruption in Montenegro, noting that it is “prevalent in many areas and remains an issue of concern.”

The report also outlined that the capacity of the police in particular to fight corruption “remains insufficient and needs improvement.”

The Commission’s report said that material and human resources of the police at Montenegro’s borders are insufficient to cope with the challenges of participating in the investigation of cross-border crime and undertaking rigorous electronic surveillance.