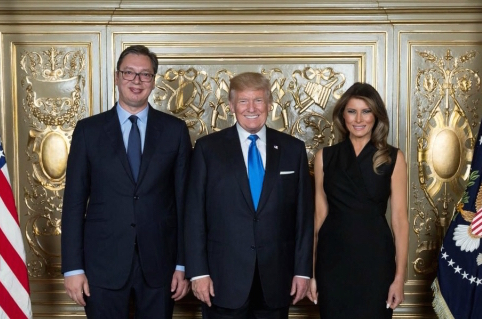 Brother of three American citizens who fought in the KLA and were killed after the Kosovo War ended urges Trump to reject the invitation to visit Serbia.

After claims made by Serbian President Aleksandar Vucic that US President Donald Trump has accepted an invitation to visit Serbia, the family of the Bytyci brothers, who were killed in Serbia after the end of the Kosovo War, issued a strong opposing reaction.

“For 18 years, my family has spent every bit of energy, resources, and money that we have to get justice for my brothers,” said Fatose Bytyqi, who has been seeking justice for the death of his three brothers Ylli, Mehmet and Agron, in a press release issued on Thursday. “We are heartbroken by the news and urge President Trump to reconsider his decision.”

The three brothers, American citizens, were members of Kosovo Liberation Army, KLA, as part of the Atlantic Brigade – a branch composed mainly of Americans and Western European Kosovars. After the war ended, the three brothers were driving their Roma neighbors to safety in  Kraljevo, Serbia when they disappeared. Their bodies were found in an unmarked grave in 2001.

The unsolved murder continues to be a lingering issue between US and Serbia, although current President Aleksandar Vucic has made promises that the case will be solved.

In case President Trump does accept President Vucic’s invitation to visit Serbia, he would be the first US President to visit Belgrade since Jimmy Carter’s visit in 1980 to the then Yugoslav federation.

“President Trump has apparently doubled down on the Obama-Biden strategy for Serbia,” said Praveen Madhiraju, a pro bono advisor to the Bytyqi family. “The Obama administration traded almost every concession they could after Mr. Vucic’s empty promises to resolve the Bytyqi murders. We urge President Trump to do more to defend three murdered Americans than just follow the Obama administration’s weak and foolish tactics. We believe that in the end, President Trump will defend three murdered Americans first.”

The Bytyci family maintains that the orders came down from General Goran Radosavljevic, a close associate of President Vucic, and that the execution came through the Interior Ministry headquarters. Radosavlejvic denies all charges.

“They have proof, they know who was in Petrovo Selo, who worked there, and why the Bytyqi brothers were murdered,” Fatose Bytyci said to Prishtina Insight back in March of this year. “Not only the Vucic government but early governments, they knew it too … It is the whole system. And that’s why it is taking so long.”