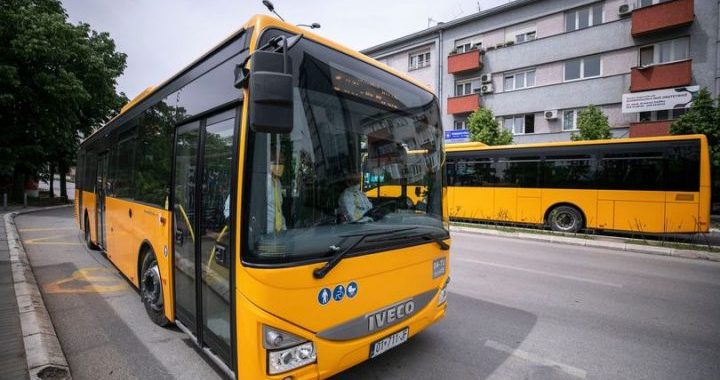 Photo: Courtesy of Municipality of Prishtina

Prishtina is due to see its first electric buses from 2023, which will aid the city’s green transition.

Electric buses will circulate the streets of Prishtina for the first time in 2023, in an attempt to lower air pollution in the capital.

The Mayor of Prishtina, Përparim Rama, signed a contract of 10 million euros with the European Bank for Reconstruction and Development, EBRD for the purchase of 30 buses, six of which will be electric and 24 of the EURO VI model that are in accordance with the oil emissions standard, on December 15.

The buses will be owned by the municipal company Urban Traffic, which currently covers seven lines in the capital.

Rama, during the signing of the agreement, said the incorporation of the first electric buses was a key step in the city’s green transition.

“The incorporation of the first electric buses in the city is a key moment towards the green transition. This will have a tangible impact on the lives of our citizens and will take meaningful steps towards a healthier and cleaner Prishtina. We are very proud to continue a close cooperation with our partner EBRD,” Rama said.

An environmental activist from the organization “Active Citizens”, Flutra Zymi, told BIRN that she welcomed the decision even though she would like to see more such buses.

She emphasized that such buses should also run towards Germia park, in order to cut the number of visits by private cars.

The 30 new buses are expected to be put into circulation at the end of 2023.

The municipality plans to make several reforms in the Urban Traffic company starting from 2023, including an integrated ticket, payment by SMS and QR code, as well as new regulations for transport.

Citizens of Prishtina currently pay 40 cents per ticket on urban buses but the price will rise with the approval of the new regulation.

Urban Traffic currently owns 51 buses, also purchased through a loan with EBRD, in 2016.

Modernization of urban traffic and road infrastructure are part of the capital’s 12-year mobility plan.

The mobility plan envisages that the capital will have 160 buses – 80 of Urban Traffic Company and 80 of private operators (whose fleet modernization is also expected).