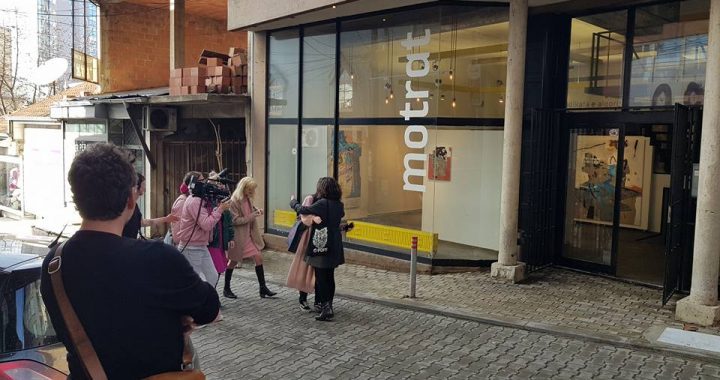 Exhibition celebrates tradition and transformation of the Albanian dowry

The exhibition space in Prishtina, Motrat, will show her artwork until February 20.

Sitting down with Prishtina Insight on the exhibition’s opening night, Ukimeri explained that the dowry, called cejzi in Albanian, is a traditional practice that forms part of the institution of marriage, in which women will prepare a collection of items as part of their material inheritance before their wedding.

“I’ve spent the last year or two doing research into the idea of dowry both in the past and the present, and how different cultures organized it. It’s incredibly old, dating back to Babylonia and ancient Greece,” said Ukimeri. “Today, in Kosovo, people know about the cejzi but because of changing times, the practice has been totally modernized.”

This ritual traditionally creates many beautiful pieces of work such as goblen, woven artwork hung on walls, tentene, handmade doilies found in many homes in the Balkans, and qilim, which are rugs, as well as socks, decorative gifts, soft furnishings and other handcrafted items which are represented in Ukimeri’s work.

The ritual itself can be viewed as controversial, considering its traditional connection with archaic gender roles and patriarchal understandings of marriage and family.

Through her paper filigree pieces, Ukimeri explores this side of Cejzi, but primarily the importance of cherishing such a valuable source of cultural heritage.

According to Ukimeri, the practice of Cejzi used to be something women prepared themselves, yet if they want to carry on the traditions today, people will buy items or pay others to prepare them.

Her technique, using paper filigree to illustrate well-known staples that women would include in Cejzi, represents how something so traditional has changed, and can change, and the kinds of transformation it has passed through.

“This change is not a bad thing, now if people do it, they do it for fun,” she said. “It’s a little less personal, definitely, and a lot of women consider it to be outdated, which means they aren’t interested in continuing the practice.”

Paper filigree is the practice of using very thin strips of paper and rolling them tightly using needles and other tools to form various shapes, similar to silver filigree, a complex and slightly more expensive traditional method of making jewellery that is an important part of Kosovo’s culture and heritage.

However, as the tradition of women handcrafting beautiful, complex works in preparation for marriage dwindles, Ukimeri hopes that her research and her pieces will have make people take notice of its other values.

“My hope is not that the practice would be revitalized, but that people understand how important it is to promote this aspect of our culture,” said Ukimeri. “Within Cejzi you can find beautiful works, it really is art.”

Ukimeri explained how a practice that is now seen as outdated can be transformed, and how it can have huge value in developing the relationship between culture, women and labor.

“Reviving these kinds of traditions and appreciating Kosovo’s culture could be of huge benefit to women,” said Ukimeri. “The idea now is that women could sell these handcrafted items, recognizing the important relationship between cultural and economic development.”

Ukimeri has been practicing the paper filigree technique since 2012, and this is the second exhibition of her work that she has held.

“This sort of medium is primarily used in very small, ornamental ways, and that is how I started with it. But I soon started to incorporate my own artistic themes and make it bigger and bigger,” she said.

Ukimeri was able to conduct research into Cejzi, develop her artistic techniques and realize her exhibition with the help of Heritage Space, a platform that is created by the organization Cultural Heritage without Borders, CHwB, that provides space for individuals to use elements of valuable cultural heritage to develop and inspire their own artistic creations, with the aim of Kosovo’s cultural, social and economic development at its core.

“Being part of the Heritage Space program has allowed me to hold workshops, and I’ve helped six different people learn how to use this technique,” said Ukimeri. “You can do beautiful things with this practice.”

Cejzi will be showing at the Motrat Gallery until Tuesday, February 20, at Motrat Gallery in Prishtina. On the closing night, Motrat will host a debate about Cejzi at the Gallery, aiming to open up a discussion through Ukimeri’s art about the modern and traditional roles of Cejzi, and the relationship between its social and cultural functions.