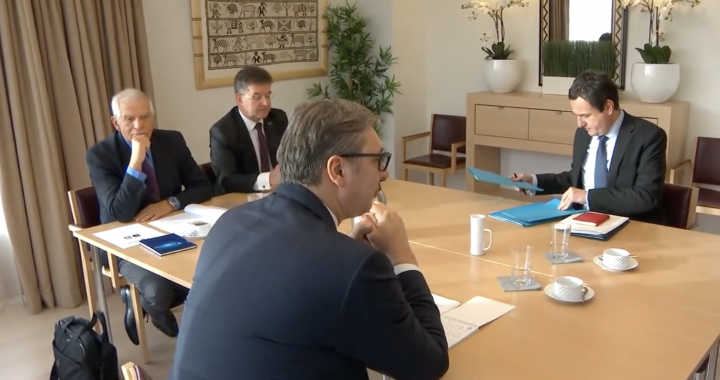 After the EU foreign policy chief held meetings with the two leaders, he said: 'We put forward a proposal that could have avoided this risky situation, which President Vucic accepted today, but Prime Minister Kurti did not'.

Borell said after the meetings that, “after many hours of discussion, the two parties did not agree to a solution today”, and added that, “there is an important responsibility for the failure of the talks today and for any escalation and violence that may take over on the ground on the following days”.

“For the sake of transparency I have to say we put forward a proposal that could have avoided this risky situation, which President Vucic accepted today, but Prime Minister Kurti did not”, Borell said.

Since there was no agreement, Borell said, he called on both Serbia and Kosovo to implement what was proposed.

He added that he will inform EU member states “about the behaviour of the different parties and lack of respect for international legal obligations and I have to say this goes particularly for Kosovo.

“If European Union accession is their [Serbia, Kosovo] ultimate objective … we expect them to act accordingly with that,” Borell said.

Serbia’s Vucic told the media after the meeting that “the Serbian side was completely constructive.. but the Albanian side did not want to accept anything for a single second.

“We have sleepless nights and many difficult days ahead of us, but we will listen to the advice and request of the High Representative; he asked that they [Kosovo] not apply fines [to users of Serbian license plates] and that we do not issue new KM plates, which we said is fine, so we will respect that and act accordingly,” Vucic said.

Kurti, however, told media that the EU proposal “is not acceptable if it is not accompanied by what we were invited [to discuss], meaning an agreement to urgently engage for a final agreement of full normalization of relations” between Kosovo and Serbia.

“In the proposal provided by Borrell and Lajcak there was a deadline on March 2023″ for a final agreement, Kurti told the media, accusing Borrell of “giving up on the March 2023 deadline and on the proposal of the European Union for the normalization of relations between Kosovo and Serbia”.

Expressing readiness to continue talks for such a final mutual agreement, Kurti told the media that “we cannot be irresponsible and not treat the current issues – but we also cannot transform into state leaders who deal only with license plates issues and do not discuss normalization of relations”.

“That is why we are in this situation now and I hope the European Union will find the strength to back its own proposal for the normalization of relations,” Kurti added.

Kosovo Police announced on Sunday that fining owners of vehicles with license plates issued by Serbia that Kosovo considers illegal would start on Tuesday, November 22, instead of on Monday, as per a late October government decision.

BIRN asked the Kosovo Interior Ministry whether this decision will be implemented starting from Tuesday after the failure to reach an agreement in Brussels, but received no response by the time of publication.

The British ambassador to Kosovo, Nicholas Abbott, described the lack of an agreement as disappointing.

“The current situation poses risks to the safety and livelihoods of ordinary people in Kosovo and distracts from the government’s mission to improve their lives,” Abbott wrote on Facebook after the meeting in Brussels, urging all parties “to avoid action that could lead to an escalation in tension or cause threats to security”.

The dispute about licence plates triggered mass resignations of Kosovo Serbs from institutions in Serb-majority municipalities in the north of Kosovo at the beginning of November.

The issue of vehicle licence plates has long been a source of dispute between Serbia and its predominantly Albanian-populated former southern province, which broke away in a war in 1999 and declared independence with the backing of the major Western powers in 2008.

Ever since the war and the withdrawal of Serbian forces, Serbia has continued to operate a parallel state system, issuing documents, licence plates and other papers for Serbs in Kosovo.

In 2011, Kosovo and Serbia reached an agreement under which Kosovo would issue licence plates marked RKS for Republic of Kosovo and, in a concession to Serbia’s refusal to recognise its former province as a state, KS, denoting simply “Kosovo”.

After this agreement expired in September 2021, the Kosovo government decided not to extend it, and police started to confiscate Serbian-issued licence plates.

The dispute escalated again in June, when the Kosovo government announced that drivers of all vehicles with plates issued by Serbia from June 10, 1999, until April 21, 2022, would have until September 30, 2022, to get RKS plates.

Serbia’s Vucic and Kosovo Prime Minister Kurti discussed the issue at an unsuccessful meeting in August but found no solution. In October, Kurti announced that the license plates decision implementation was rescheduled to November 1 and that on November 21 fines should start.