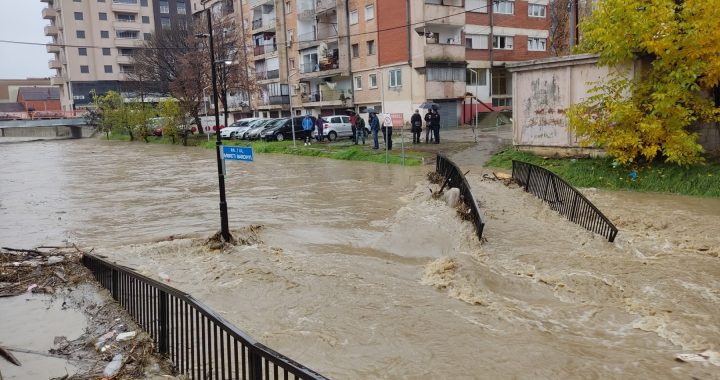 Heavy rain risks causing floods in many cities in Kosovo, damaging agricultural land and family businesses – while some cities also facing a shortage of drinking water and are suspending school classes.

Peja, Mitrovica, Gjakova, Vushtrria, Decan, Malisheva and Klina are among the towns and cities facing floods due to the heavy rain over the weekend. As a result, many family businesses and much agricultural land have been damaged.

The Hydrometeorological Institute of Kosovo announced on November 20 that rain of varying intensity and territorial extent is expected to continue on Monday.

The heaviest rainfall, according to the Institute, will fall in Gjakova, Junik, Decan, Peja, Istog, Klina, Malisheva, Rahovec and some other places.

According to the Institute, the heavy rainfall may create conditions for rapid flooding, which could also cause landslides, blockages of sewage systems and difficulties in traffic.

In addition to damaged roads and agricultural land, some towns are also facing a shortage of drinking water.

The Prishtina Regional Water Authority has notified that some parts of Prishtina, Fushe Kosova, Obilic and Drenas will face a lack of drinking water due to the overflow in the Iber-Lepenci canal, making water sanitation treatment impossible.

The mayor of South Mitrovica, Bedri Hamza, on Monday declared that the flood situation is serious and that they are taking all the necessary measures.

“Within our capacities, we are taking all the necessary measures; we have mobilized all necessary operators. The heavy rain has caused the water level in the river in Mitrovica to rise and this has caused a serious situation,” he said.

The Municipality of Istog on Monday announced that, as a result of the heavy rains and due to the danger of crossing streets, classes were being suspended in some schools.

Meanwhile, in the village of Jasenovik, in northern  Mitrovica,  police came to the aid of the citizens who could not move around due to the filling of the road with mud and stones.

After the heavy rain caused floods in many parts of the country, the Minister of Defence, Armend Mehaj, said on Facebook that they were monitoring the situation on the ground.

“The Kosovo Security Force, as always in any emergency situation, is fully ready with all its available capacities to fulfill the legal duty of military support of civil authorities and our citizens,” Mehaj stated.

The Emergency Management Agency, EMA, on Monday declared that the situation was worst in the Dukagjini region and that there had been various forms of damage from the floods.

“Based on the data from the Municipal Directors for Protection and Rescue, the worst situation is in the Dukagjini region, where we have different damages from floods,” the agency stated.