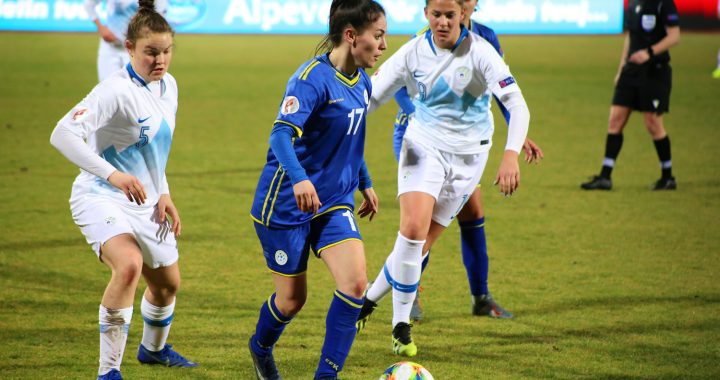 Kosovo’s women’s football team suffers back to back losses in March’s EURO 2021 qualifiers against Slovenia and Russia, but receive warm support from fans in Prishtina.

When the final whistle blew at the Fadil Vokrri stadium in Prishtina on Tuesday night, cementing a 0-3 victory for Slovenia over Kosovo, both teams received rapturous responses from the crowd.

As the Slovenian players celebrated their victory with around 50 KFOR soldiers from the country in one corner of the stadium, Kosovo’s were saluted by a strong contingent from the national team’s official Dardanet fan group, as well as hundreds of other fans who stayed long after the full time whistle.

Many Kosovo players climbed into the stands to take photos and receive embraces from fans and family members alike. A number of supporters also lingered outside the stadium long after the match had finished, awaiting the women who are clearly becoming heroes to many young football fans.

It was a bittersweet conclusion to a difficult return to qualification for Euro 2021 for Kosovo. Having won two and lost one of their opening three matches in Group A, the Dardanians suffered two heavy defeats in this round of fixtures, 0-5 to Russia on Friday as well as Tuesday night’s 0-3 loss to Slovenia.

The results leave Kosovo fourth in the group on six points, five clear of Estonia and Turkey in fifth and sixth place. Russia and Slovenia are placed second and third respectively, both on nine points, while the Netherlands occupies the top spot with 18.

Despite not registering on the scoresheet in either game, Kosovo’s young attack demonstrated their abilities to cause problems to opposing defences, registering a handful of shots on goal in both games.

KFF Mitrovica’s Blerta Shala forced a fine save from Slovenian goalkeeper Nika Sapek from a free kick, while 20-year-old Ereleta Memeti, who plays for the second side of Frauen Bundesliga Champions Wolfsburg in Germany, proved in both games that she can easily skip past far more experienced defenders.

But while there were glimmers of hope in attack, in defence Kosovo are still conceding unnecessary goals leaving them with impossible situations. An own goal left the team one goal down against Russia within the first minute, while a poorly defended free kick saw Slovenia take the lead inside the first 15 minutes in Prishtina.

Speaking after Tuesday’s game, coach Aferdita Fazlija stated that the side had performed much better than in the 5-0 defeat to Slovenia in Dravograd in September. “We did a lot of good things during this match, but limped to the final whistle,” she said.

Fazlija also heaped praise on 20-year-old Edona Kastrati, who made her debut for Kosovo on Tuesday night, replacing Besjana Recica who had educational commitments and missed the match with Slovenia.

Next up for the women’s team will be an encounter with the 2019 World Cup finalists the Netherlands in Prishtina on April 10, before travelling to Malatya to face bottom of the group Turkey on April 14.

Off the pitch, UEFA are still seemingly coming to terms with the reality of Kosovo’s membership. Friday’s match with Russia was a rescheduling of a fixture originally set to be played in October, which was postponed by UEFA for “security reasons” according to the Russian Football Union.

The match was eventually rescheduled in a neutral venue, the BRITA-Arena in Wiesbaden, Germany, despite an offer from the Football Federation of Kosovo for the match to be played in Shkoder, Albania. The return fixture between the two sides in June will also take place in a neutral venue.

According to a decision from UEFA dated October 18, and made public by the Football Federation of Kosovo on March 5, Kosovo and Russia will be prevented from being drawn together in any UEFA competitions until further notice.

The decision also states that aside from teams from Serbia, Bosnia and Herzegovina and Russia, “all other representative or club teams must accept to play against a Kosovo representative or club team as a result of a draw, be it on their own territory or on the territory of Kosovo,” hopefully putting an end to Kosovo ‘home’ matches being played abroad.