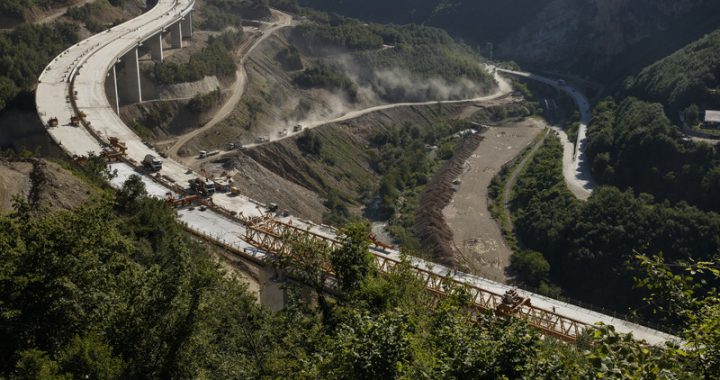 A view of the motorway 'Arben Xhaferi' near the town of Kacanik, Kosovo, 01 June 2018. EPA-EFE/VALDRIN XHEMAJ

The Special Prosecution has indicted the former Infrastructure minister and two other former officials over the allocation of an additional 53 million euros for Bechtel & Enka to build a highway.

The Special Prosecution of Kosovo has filed an indictment for abuse of official position against a former Minister of Infrastructure, and two other former ministry officials, over the allocation of an additional 53 million euros to Bechtel & Enka to construct the highway connecting Kosovo and North Macedonia.

The government’s decision in 2008 to allocate another 53 million euros for the US-Turkish company to build the Arbën Xhaferi highway has resulted in an indictment filed against former minister Pal Lekaj, former ministry official Nebih Shatri and Eset Berisha, Lekaj’s chief-of-staff, all suspected of “abuse of official position or authority”.

Lekaj had stated that, “due to the failure of the previous government to pay its bills properly, the company asked us to initially pay 63 million euros for maintenance of equipment and expenses”.

In June 2018, KALLXO.com published research, “Transactions and the source of the fine of 53 million euros for the Highway”, which showed the document that former Minister Lekaj sent to the Secretary General of the Prime Minister on April 20 that year.

Lekaj called the document an “Explanatory Memorandum for the request of the contractor ‘Bechtel & Enka’ for compensation for indirect costs due to the extension of the contract for the construction of the highway R6 Prishtina – Hani i Elezit.”

KALLXO.com had found that the annex-contract was signed only 18 days after the government of Prime Minister Ramush Haradinaj assumed power. The government was in office from 2017 until 2020.

Under the terms of the initial contract, the Prishtina–Hani Elezit or Arbën Xhaferi highway was to be completed by January 1, 2018.

But the annex to the contract signed by the Haradinaj government extended the deadline for completion to December 31, 2018.

Former Minister Lekaj through the memorandum informed the government about Bechtel & Enka’s demands, which eventually cost the state budget another 53 million euros.

Bechtel & Enka had asked the government for 16,600,000 euros for indirect damages or expenses for the management staff that administered the project. It wanted another 36,300,000 euros based on the usability of the equipment. Two figures were mentioned here – an initial request for 30.8 million euros, but, in the final calculations, 36.3 million euros – 5.5 million euros more.

The highway was inaugurated on May 29, 2019 with a five month delay.

The highway was started in 2014 by Minister Fehmi Mujota who signed the contract with Bechtel & Enka, continued by Minister Lutfi Zharku and ended during the time of Pal Lekaj.

To give the project patriotic weight, the former president of Kosovo, Hashim Thaci, then the PM, named the new highway after Arber Xhaferi, the ethnic Albanian Macedonian who signed the peace agreement in Macedonia between the government and ethnic Albanian forces, ending an armed conflict there in 2001.