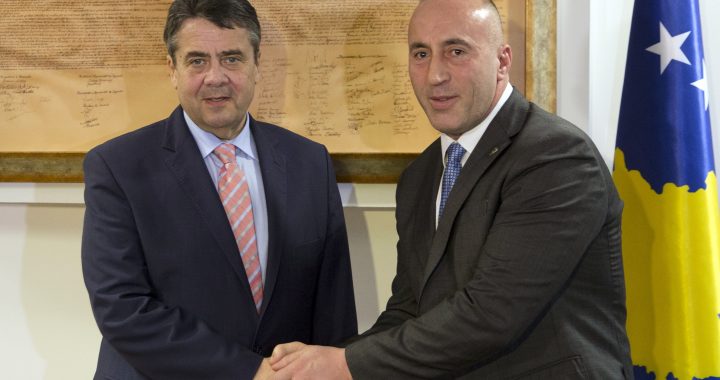 Recognition of Kosovo’s independence is one of the conditions for Serbia to join the EU, German Foreign Minister Sigmar Gabriel said.

“If Serbia wants to move forward towards the EU, respecting the law is primary, but recognizing Kosovo is too. This is a central condition for following the path to the EU,” said German Foreign Minister Sigmar Gabriel at a press conference on Wednesday, Radio Free Europe reports.

Gabriel made the statement following a meeting with Kosovo Prime Minister Ramush Haradinaj prior to the country’s 10th anniversary of the declaration of independence.

“One of the tasks will also be convincing the five EU nations that have not recognized Kosovo yet, because such recognition is meaningful, as Kosovo will never again be part of Serbia,” he said.

“It would be in everybody’s interest to find a solution so that Serbia finishes the issue of recognition. This is important for Serbia, otherwise it will not be able to become a member of the EU. But it is in Kosovo’s interest as well. This is a case where everybody would win,” Gabriel said.

Arriving after Montenegrin Prime Minister Dusko Markovic, who also began his official visit to Kosovo on Wednesday afternoon, the German Foreign Minister called on local institutions to solve the issue of the border demarcation with Montenegro so that Kosovo citizens access visa-free travel within the Schengen area.

“I am glad that there is a will to solve the issue of demarcation with Montenegro so that this criterion can be fulfilled and there is visa liberalization for Kosovo citizens,” he said.

Gabriel assured Haradinaj that Germany will be a stable partner to Kosovo.

“Germany is one of the first countries that recognized Kosovo’s statehood, and it [Kosovo] should be proud of its achievements,” he added.

Gabriel met President Hashim Thaci on Thursday to congratulate him on the independence anniversary.