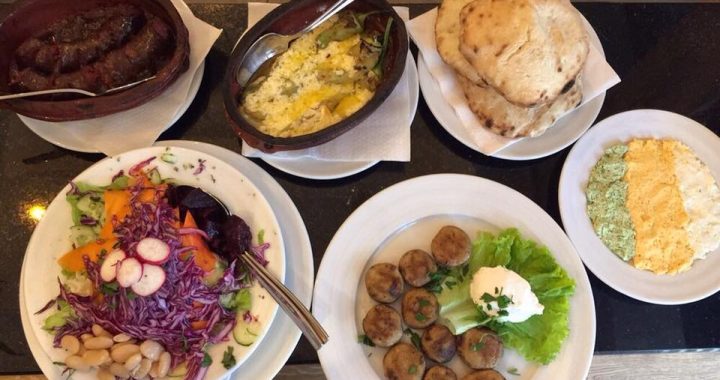 Guide: Finding the taste of Dokufest

Here are some top picks for places to eat and drink around Prizren if you are visiting the city’s international documentary film festival, Dokufest, which is running until Saturday, August 10.

Dokufest is in full swing following its opening weekend, with another week full of films, music, workshops, talks, and art exhibitions already underway.

When faced with a small city that is full to the brim with festival goers, it can be a little daunting trying to find a good place to grab some food or to have a drink and relax in between films.

Here are a few of Prishtina Insight’s recommendations if you need somewhere quick, easy and central to the festival, including the best burek in town, a new place to grab a beer, the spots with the best views in the city or where to go for a much-needed fresh fruit smoothie.

If you’re looking for quick, cheap, and tasty food, head to Sarajeva, an easy-to-miss hole in the wall in the very center of Prizren. One of the oldest places in town, Sarajeva has only four items on the menu, and all of them are burek.

You can choose from the tasty yet more typical burek flavors of meat, cheese or spinach, but Sarajeva also sells a unique spiced cabbage-filled burek which cannot be missed. Add some yoghurt on the side, and your meal will cost you only 1.50 euros.

Located right next to the fountain in the main square, opposite the ticket booth for Dokufest, Sarajeva is perfect for a quick bite in between films.

Up the hill from Shadervan square past the orthodox church, Tiffany is a great spot for a group of friends looking to share some tasty Albanian food. Tiffany offers a menu full of fantastic choices and perfect for sharing so everyone can try a bit of everything. But beware of ordering too much: the menu allows you to choose a ‘small’ or ‘large’ portion, and the former is more than enough for a few friends to try a dish.

From the main menu, you can choose from mantia, small pockets of burek served slathered in yoghurt, Elbasan tava, a creamy garlic-filled dish traditionally served with lamb, sarma, meat stuffed in vine leaves, as well as many other dishes from the grill. If you’re looking for something a little lighter, their mixed salads, peppers cooked in kajmak, roast vegetables and selection of cheeses is also available.

Tiffany is a little more expensive than other places in Prizren, but the quality of the food ensures that it comes highly recommended. Go with a group of four or five friends, and you will pay around five or six euros each.

Another quick and easy stop that can be found in between the Lumbardhi cinema and Shtepia i Kultures, Gazza is perfect if you feel like you need something fresh and healthy. Gazza sells a whole range of different fresh fruit smoothies, from kiwi and banana to mixed forest fruit. They also sell more exotic smoothies including ginger, mango and avocado, all between 2 and 3.50 euros.

They also have simple and cheap food available in the small diner next to its smoothie bar serving pide, pizza, and sandwiches, where you can fill up for no more than a couple of euros.

One of Prizren’s most well-known qebaptore, Te Syla, is the place to go if you want to eat the traditional meats of the Balkans like cevapi, suxhuk and other items straight off the grill, all served with fries and salad.

Located just a few steps down the river from Shadervan square, it is one of the most well known places where cevapi is served in Prizren. Expect to pay around two and a half euros for a dish with five pieces of cevapi.

Although it is another upmarket restaurant similar to Tiffany, Ambient comes recommended not just for the food, but for its spectacular views. Right next to the Lumbardhi river, Ambient is a restaurant that runs the length of the hill that eventually can take you up to Prizren’s medieval fortress, and if you take one of the seats ascending the hill you can listen to the currents of the river as you look over the historic old town of Prizren.

Offering up traditional fare of meats, vegetables and cheeses, Ambient is a great spot for an evening meal, and its friendly staff are always on hand to refill a plate or two. Expect to pay between five and ten euros each, closer to ten if you have a few glasses of wine.

‘Revolution is us’ pop-up bar

It’s not just DokuFest taking place in Prizren this week, this year’s edition of the Autostrada Biennale opened to the public in July and continues until September, exhibiting artwork curated by Giacinto Di Pietrantonio across the city. As part of the biennale, an installation called ‘Revolution is Us,’ has been opened, a creative space where festival goers can relax by the green riverbanks of Lumbardhi, and have a few drinks as well. It is open from 10:00 until midnight.