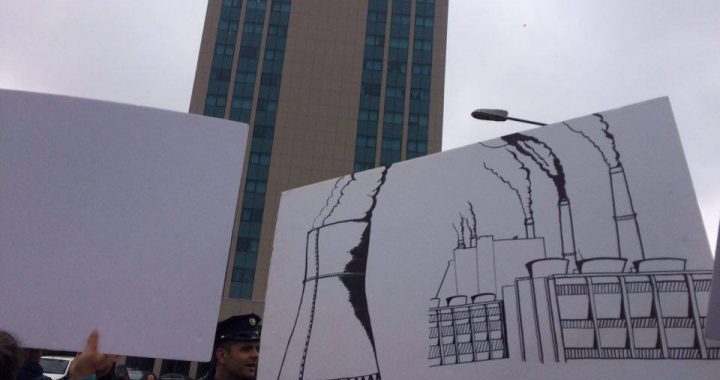 Hade residents protest in front of Ministry of Environment

Dozens of residents living next to the Sibovc coal-mine protest against environmental conditions and demand just resettlement.

Inhabitants of the village of Hade, located in the municipality of Obiliq, gathered in front of the Ministry of Environment and Spatial Planning with tractors and umbrellas to protest their resettlement.  For over ten years, hundreds of villagers have been waiting to be moved from Hade to Shkabaj, as the Sibovc mine–which fuels the Obiliq power plants–expands.

Hade villagers have now been waiting for expropriation in order to make space for coal extraction by the Kosovo Energy Corporation in the new neighborhood in Shkabaj, colloquially called “New Hade.”

On Monday, the residents withstood the rain to demand a just resettlement from “the zone of special economic interest.”

Ragip Grajqevci, a Hade representative, emphasised that this time around, they were protesting against the environmental conditions in the village.

“The expansion of the mine continues deeper and deeper towards the village. Therefore our reasons [for protest] are coal and clay mining, coal burning and its gas release, the noise of the transportation lines, smoke, and the dust,” said Grajqevci.

Arsim Preniqi, an area resident, complained about the way their land was being assessed as part of the expropriation process.

“We came out to protest for the dislocation of the Hade village, to do this in the right way, in the regular way, not through theft – as they have been doing,” said Preniqi.  “Our lands should be paid for, all of our yards, not to mark them as agricultural land, because we, the family members, lose this way,” said Preniqi.