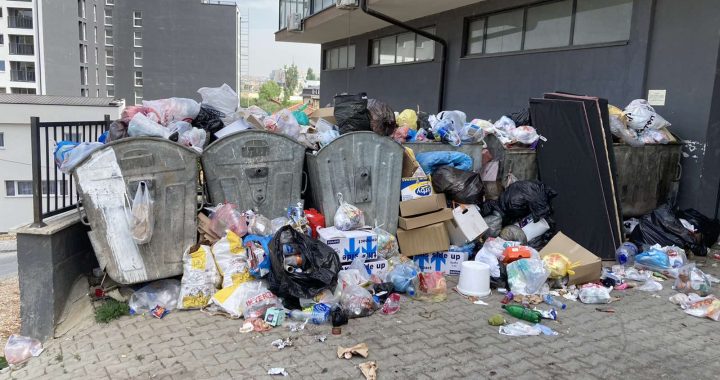 As the sanitation company is not collecting garbage under the pretext that it cannot empty its trucks at the local landfill, the streets of Prishtina are increasingly overloaded with garbage.

From Monday, the neighborhoods of the capital of Kosovo have resembled a landfill because the responsible trash collecting company, Pastrimi, has not collected the waste.

Pastrimi, which collects waste from seven municipalities in and around Prishtina, says it did not collect the waste because it has been unable to empty the trucks because the Mirash landfill is currently closed.

After almost two days of growing pollution, the head of Pastrimi, Burim Kelmendi, told BIRN that the waste will be removed soon, as it can now empty its garbage trucks at the Mirash landfill once more.

Previously, in a notification, it justified its inaction by saying that the Kosovo Landfill Management Company had closed its access to the landfill in Obiliq and for this reason it had not removed the waste.

According to the Landfill Management Company, the landfill was not closed but the temporary halt to access was a warning measure for Pastrimi, which has not been paying its bills.

Avdullah Haxhiu, Chief Executive of the Kosovo Landfill Management Company, said that for three days it imposed restrictive access for several hours throughout the day, but not a complete blockage of access.

“I do not know why they did not empty their trucks during other hours of the day. It was not a total blockade of access to the landfill,” said Haxhiu.

The company urged Pastrimi and its shareholders to fulfill their obligations, or further steps will be taken, including a total ban on waste disposal in the landfill.

It said Pastrimi is not paying its bills or adhering to any debt repayment agreement, and its total debt is now over 658,000 euros.

Kelmendi said that because of inflation, a price increase for waste collection within the month is now inevitable.

“We definitely have to increase the monthly bill for waste collection due to the overall increase in prices, from 3.80 euros to 6 euros per month,” he said.