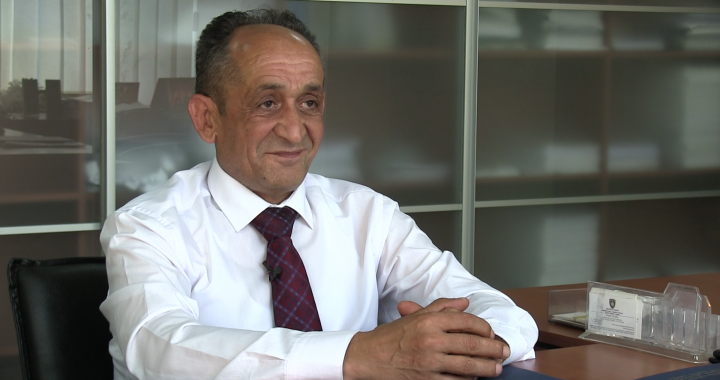 After leaked wiretaps showed governing party MPs using racist slurs, Kujtim Pacaku stood up and asked for a public apology. For a day, he became a hero when, surprisingly, he got it.

Expressions of contempt used against the Roma in Kosovo hinders the community’s integration in society, says Kujtim Pacaku, a member of parliament from Kosovo’s Roma community.

In early August, the news portal Insajderi published wiretaps of phone calls between Adem Grabovci, who was then chair of the caucus of the top coalition party, Democratic Party of Kosovo, PDK,  and other party officials that suggest cronyism and political appointments by the party in leading public positions. In one of the leaked wiretaps Grabovci and MP Safete Hadergjonaj were caught on tape using racist slurs associated to the Roma community.

According to Kosovo’s constitution, there are 20 reserved seats for representatives of minority communities in the Kosovo Assembly. 10 MPs must come from the non-Serb minorities.

In the leaked conversation, Grabovci and Hadergjonaj are casually conversing about their jobs as MPs, when Hadergjonaj recounts a “joke” to Grabovci, saying that when he was representing presumably PDK, all the communities were there: “magjupë, gabel and shkije,” but now that someone else is doing his job, they too have gone.

At the Assembly session on September 1, Pacaku, who represents the Kosovaki Nevi Romani Partia, KNRP, took the floor, chided his fellow MPs for using derogatory terms, and sought an apology.

“I’m an MP, a member of the Assembly Presidency, a writer of Roma community, and not a writer of the ‘magjup’ or ‘gabel’ community. These two terms we’ve heard in the famous Insajder, where Mrs Hadergjonaj and Grabovci were speaking. I do not have the power to sue them, but I won’t let this stand without an apology,” said a visibly distressed Pacaku.

Assembly speaker Kadri Veseli immediately reacted and apologized in the name of all MPs.

Grabovci apologized too, adding half-heartedly that the leaked wiretaps have “terrorized” his family in the past month, and that after the public outcry over the wiretaps, he too knew what it was like to be vilified by the general public.

Sitting in his office, Pacaku, who is also a poet and a long-time Roma advocate, told PI that many children of the Roma community were impelled to leave school due to hateful language.

“Pejorative language, at least when it comes to the Roma community, has always prevented integration in society,” Pacaku said, “be that in education, with students, at the hospital or in the streets,” Pacaku said.

Before speaking up at the assembly session, Pacaku explained, he had been waiting for an opportunity to ask Grabovci and Hadergjonaj for a clarification and, as a result, an apology.

“Apologizing is a good example for the region regarding what Kosovo can do for minorities. No MP in Serbia, no assembly speaker in Serbia, Bulgaria, Macedonia, Montenegro or even Croatia or Slovenia would do this,” Pacaku said.

Pacaku, said that he felt proud when all MPs became willing to apologize for the phone conversation where racist language was used.

“In the Assembly, an arena of debate, everything happened but debate. Both the coalition and the opposition applauded after my speech. I felt proud because when I asked whether there is any Albanian MP who can apologize, every MP, coalition and opposition, raised their hands to come forth and apologize.”