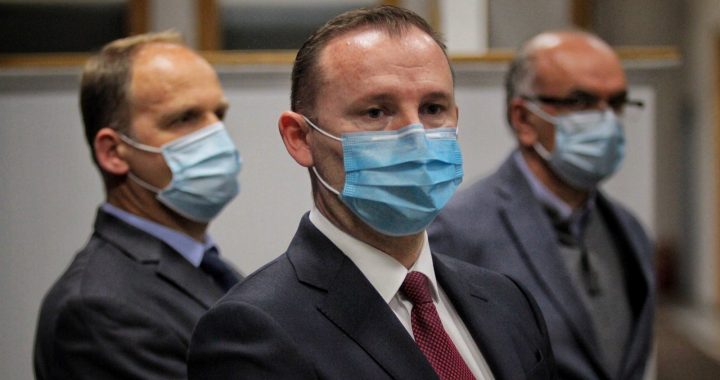 Minister of Health Armend Zemaj has announced that measures to prevent the spread of coronavirus will be taken at the ‘national level’ next week, adding that the first vaccines should arrive in Kosovo in the first three months of 2021.

At a press conference on Friday, health minister Armend Zemaj stated that new measures to prevent the spread of coronavirus will be brought in next week.

Kosovo is currently operating a three-tier system, in which different measures apply to different municipalities depending on the epidemiological system. However, Zemaj stated that the new measures will apply at the “national level.”

The new classification of municipalities was also revealed at the press conference. Prishtina is still in the red zone, which is subject to the strictest measures, including a 19:00 curfew and a ban on entry and exits to the municipality after this time. Other municipalities in the red zone include Fushe Kosove, Obilic, Podujevo and North and South Mitrovica.

Head of the National Institute of Public Health, Naser Ramadani, stated at the press conference that 385 cases of coronavirus had been recorded in Kosovo in the previous 24 hours. Since Monday, the Institute has recorded 1,757 cases, while 42 citizens that tested positive for the virus have died. Faik Hoti, a Minister of Health Spokesperson, revealed that 795 patients are being treated in Kosovo’s hospitals, 544 of whom have tested positive for the coronavirus.

At Friday’s press conference, Zemaj stated that a working group had been formed to assess the needs for the vaccine in Kosovo, as well as a committee to negotiate its purchase.

“We want to ensure you, our population, that we have undertaken measures so that Kosovo has these vaccines, which seem like a realistic option for containing the virus long term, as soon as possible,” he said.

The minister added that COVAX, a global initiative to ensure eventual COVID-19 vaccines reach those in greatest need will also donate vaccines to Kosovo, and that vaccines should be received within the first three months of 2021.