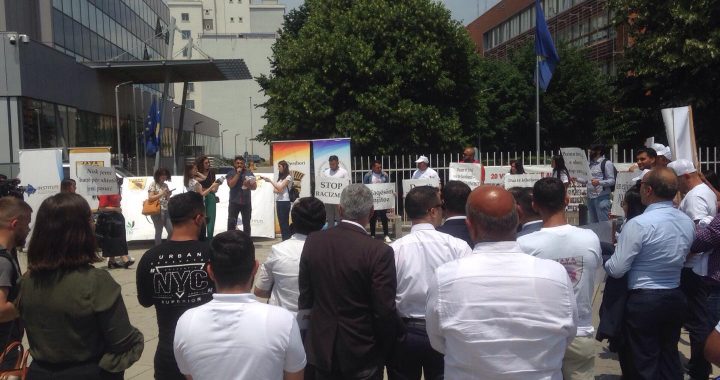 ‘I am part of a community, but I have my identity’

Members of the Egyptian community protested on Thursday in front of the Kosovo Government and the Assembly building, demanding equality and freedom from discrimination.

Carrying banners reading “We deserve to live dignified,” “We want to live equally, stop discrimination,” and “Don’t call me RAE,” members of Kosovo’s Egyptian community gathered in Skenderbeg Square outside the Kosovo government on Thursday, demanding public institutions in the country respect their right to equal treatment.

Kosovo recognizes June 24 as the national day of the Egyptian community. Smajl Demaj, an activist who was present at the protest, said that since this day last year constant discrimination has been an issue within his community.

“Whenever June arrives, we celebrate, but once the celebration is over, what happens? For the last year, we have experienced discrimination, contempt and maltreatment,” said Demaj. “We must first integrate with each other. We need solidarity with one another and accept each other as we are.”

Veton Berisha was also present at the protest, the only member of the Egyptian community to have a seat in the Kosovo Assembly. Out of a total of 120 seats, four are reserved for members of the Roma, Ashkali and Egyptian communities. Kosovo Serbs are allocated 10 seats, Bosniaks have three, Gorani one seat and two for Kosovo’s Turkish minority.

According to data from the European Center of Minority Rights in Kosovo, the Egyptian community make up less than one per cent of the population of Kosovo, around 11,500 people.

Representatives of the Roma, Ashkali and Egyptian communities have long protested against the institutional structures that have shaped minority inclusion, where laws, governmental action plans and strategies in Kosovo tend to group the three communities into one.

“I’m part of a community, but I have my identity. How long until people realize that our boys and girls are not just the boys and girls at the traffic lights? We know we can do other jobs, but the opportunity is not given to us,” said Demaj.

Statistics from the United Nations Development Program, UNDP, estimates that around 90 per cent of people in the Roma, Ashkali and Egyptian communities are unemployed, in comparison with the overall Kosovo unemployment rate, which sits at 31.4 per cent in 2019.

The Roma, Ashkali and Egyptian communities are the most vulnerable to the effects of extreme poverty in Kosovo, according to the Ministry of Labor and Social Welfare.

In the Government’s most recent strategy for minority inclusion published in 2017, the political representatives from the Egyptian community requested that their community not be included. Berisha refused to take part in its drafting due to the belief that it would only continue to isolate the three communities. As such, the strategy covers only the Roma and Ashkali communities.

Berisha encouraged citizens on Thursday to take part in a number of activities that will be held across Kosovo this week to mark the national day, including lectures, conferences and cultural and sporting activities.