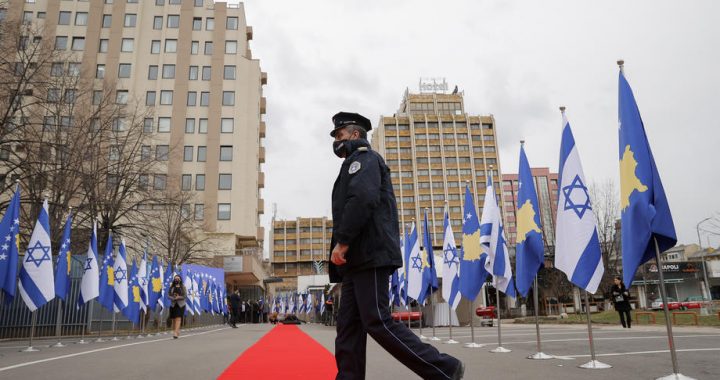 Kosovo police officers stand near by national flags of Kosovo and Israel while the virtual ceremony to establish diplomatic ties between the two countries took place at the building of Kosovo's foreign ministry in Pristina, Kosovo, 01 February 2021. Photo: EPA-EFE/VALDRIN XHEMAJ

Tamar Ziv has been appointed Israel’s first ambassador to Kosovo. Israel and Kosovo established diplomatic relations on February 1 this year and Kosovo opened its embassy in Jerusalem on March 14.

The opening of the embassy in Jerusalem derived from the September 4, 2020 agreement in Washington overseen by former US president Donald Trump.

Recognition of Kosovo’s independence by Israel was part of the agreement signed in the White House between Kosovo and Serbia, mediated by Trump. In return, Kosovo agreed to open its embassy in Jerusalem as opposed to Tel Aviv. The EU does not recognise Jerusalem as Israel’s capital.

The opening of the embassy there sparked controversy and criticism. “It’s a pity,” the European Union called the decision to open the embassy in Jerusalem. The EU called it a departure from the EU position on the issue. It seeks a prior agreement over Jerusalem between Israel and the Palestinians.

The Foreign Minister of Israel, Gabriel Ashkenazi on the day of the opening of the embassy, said both countries were making history and that diplomatic ties would increase the two countries’ cooperation in many areas.