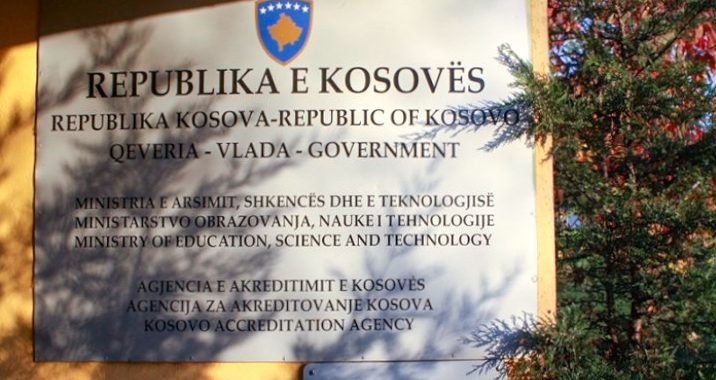 The European Association for Quality Assurance in Higher Education has discontinued the membership of Kosovo Accreditation Agency following accusations of political interference and unprofessional conduct, endangering the recognition of Kosovo diplomas abroad.

The Kosovo Accreditation Agency’s regional membership in the European Association for Quality Assurance in Higher Education, ENQA,  a consortium of institutions that ensure quality in higher education, has been revoked following its failure to adhere to the ENQA’s rules and standards on September 19.

The letter stated that the board of the ENQA was “especially concerned” with the KAA’s performance due to “only partial compliance” with the organization’s guidelines.

The ENQA’s grounds for removal included lack of “professional conduct” and lack of “consensus of the role and activities of the agency,” which has prevented the organization from providing quality assurance. In addition, the lack of financial and human resources and the Agency’s failure to follow-up on recommendations made by the ENQA as far back as 2014 contributed to the decision to kick the KAA out of the organization.

However, the KAA’s board, the National Quality Council, cited political interference as the key reason for the Accreditation Agency’s failures. “The National Quality Council has repeatedly made public its concerns about the politicization of the accreditation process in higher education in Kosovo. The NQC emphasizes that accreditation is not a political process but a professional one based on European quality standards,” reads the NCQ’s press release, issued on Thursday morning.

In February 2018, the KAA received a warning from ENQA when it was downgraded from ‘full member’ to ‘member under review’ and kicked off the European Quality Assurance Register for Higher Education, EQAR. According to a decision taken by the EQAR panel last year, KAA’s independence was compromised when the Ministry of Education, Science and Technology dismissed the entire board of KAA, the National Quality Council, and its acting director in September 2017 at the request of the prime minister, Ramush Haradinaj.

“As a consequence of the dismissal by the Minister of the KAA Board, the agency is no longer able to ‘act autonomously’ and is no longer in a position to assume ‘full responsibility for [its] operations,’” reads the EQAR panel’s decision in 2018.

The former head of the National Quality Council that was dismissed by Haradinaj, Blerim Rexha, agreed with the decisions of the European organization in a statement on Facebook on Thursday. “This debacle was expected after all the political interference from the outgoing government. The government and the Ministry of Education have reaped what they sowed. Shame on them.”

The Kosovo Accreditation Agency faced further pressure in July this year from outgoing Prime Minister Ramush Haradinaj following their decision to withdraw the accreditation of public universities in Peja, Mitrovica and Prizren for the upcoming academic year due to inaccuracies in documentation during their evaluation.

Haradinaj condemned KAA’s decision as “unacceptable,” labeling the KAA board a “mafia” organization.

In its press release, the NQC stated that the decision of the ENQA was completely correct. “It is worrying that the KAA has consistently faced a lack of support, a lack of human resources and curtailed independence that has made it impossible for the KAA to be empowered and accountable.”

The NQC stated that it is concerned that the ENQA’s decision removes Kosovo from the European Higher Education Area community, explaining that this will make it difficult for diplomas obtained by higher education institutions in the Republic of Kosovo to be recognized by other countries in Europe.

They have called for a “nationwide consensus on how to improve the situation and address all ENQA findings and decisions.”

A statement issued by the EU Office in Kosovo on Thursday also attributed the loss of membership in the ENQA to failures by Kosovo’s outgoing government led by Haradinaj.

“Being a member of this organization was not only a great achievement for Kosovo’s institutions but also very important to facilitate the mobility of students and young qualified professionals of Kosovo,” reads the press release. “The discontinuation of the membership is a setback and a direct consequence of unhealthy politics of the past, like the government decision of September 2017 to dismiss the Quality Council with wrongful reasoning.”

“It’s disheartening to see that most of them could be addressed with the government’s political will to provide the Agency and the Board with necessary resources,” the press release continued.

To work towards readmission into the ENQA, its board made a few recommendations to the KAA, including ensuring its independence, improving professional conduct, increasing its capacities and developing solid activity plans and processes for quality assurance

The EU encouraged Kosovo’s next governmental administration to work towards readmission, which will be possible in two years. “The next government should immediately address all the issues together with the KAA and insure that two years from now, when Kosovo will have the right to reapply, it will successfully regain its position in the two European institutions for higher education quality. Most importantly, the new government should not make the past mistakes.”