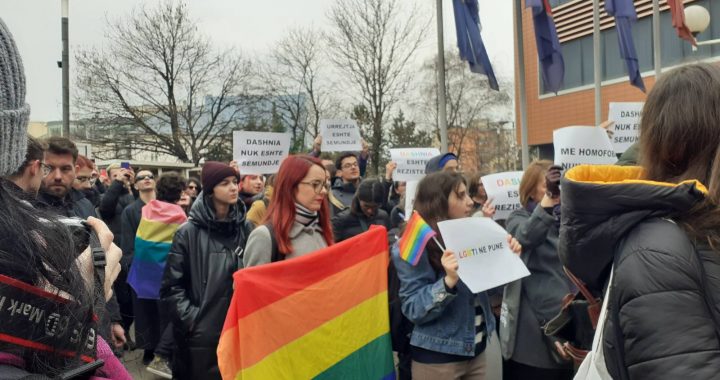 Protesters hold a sign reading ‘Homophobes, you have no place in parliament’ during a protest in Pristina, March 17, 2022. Photo: BIRN/Ardita Zeqiri

Human rights and LGBT+ activists voiced their anger after Kosovo's parliament failed to adopt a draft civil code, mainly because of an article paving the way to legalisation of same-sex unions.

Dozens of Kosovo human rights activists protested in the capital Pristina on Thursday after parliamentarians failed to adopt a draft civil code, mainly citing an article that paves the way to future legalisation of same-sex civil unions.

“Homophobes, you have no place in parliament,” was the main slogan of the protest, while the protesters also shouted: “Love is resistance; we also are part of the family”, among others.

With 28 votes for, 28 against and four abstentions, parliament failed to approve the draft civil code on Wednesday evening.

In a bid to amend the discrepancy between current reality and legislation, Kosovo’s Justice Ministry on January 11 submitted a draft civil code to parliament in which an article opened the way to the potential recognition of same-sex unions.

“Registered civil unions between persons of the same sex are allowed. Conditions and procedures are [to be] regulated by a special law,” the article wrote.

The Council for the Protection of Human Rights and Freedoms, an NGO, said it “respects as a human right the disagreement of some MPs with this civil code but does not support the derogatory, discriminating, and degrading manner of speech against anyone and in this case against a community with a different sexual orientation”.

The international rights organization Human Rights Watch, HRW, sent a letter to Kosovo President Vjosa Osmani, Prime Minister Albin Kurti, Minister of Justice Albulena Haxhiu, and MPs, saying: “As lawmakers in Kosovo continue to legislate in this area, we urge them to end the exclusion of same-sex couples from marriage, rather than creating some new, other legal regime. Uncertainty around the scope of civil unions puts same-sex couples and their families in Kosovo at risk,” the letter reads.

In its letter, HRW also mentioned that Kosovo’s constitution “recognizes that everyone has the right to marry and the right to have a family as provided by law,” without discriminated based on gender.

Blert Morina, director of the Centre for Equality and Liberty, CEL, told BIRN that religious objections should have no place in a secular society. “We function according to the constitution, not according to sacred books,” Morina said.

However, CEL welcomed parliament’s decision not to support the draft civil code because it did not go far enough, and only paved the way for legalizing same-sex unions in a non-determined future.

The draft civil code maintained the traditional definition of marriage as “a legally registered union of two spouses of different sexes,” but proposed to allow separate legislation on same-sex civil unions.

Morina earlier told BIRN that if the article on same sex civil unions is removed from the code, they will take legal action. “We will send the entire civil code to the Constitutional Court – and we are convinced we will win,” she said.