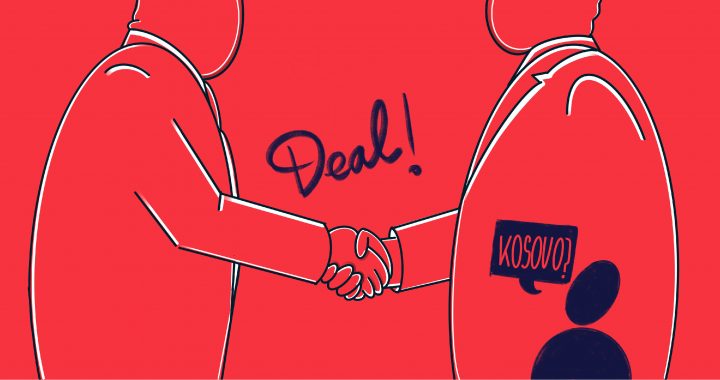 Kosovo can’t allow the dialogue to continue in this form

Overshadowed and lacking an obvious purpose, the Brussels based dialogue resumed in 2020 in the interest of the EU, Serbia... everyone except Kosovo.

2020 proved to be a tumultuous year for all, but especially Kosovo. Not content with only having to deal with a global pandemic, Kosovo plunged into a bewildering series of crises, any one of which would have been enough to keep most countries enthralled for years.

Yet, as Kurti was deposed, Thaci was indicted, and Hoti joined the global fight to decriminalise homosexuality before his government was declared illegal, one thing remained reliably immobile: the Kosovo-Serbia dialogue. The talks continued and there continued to be no progress, but still, they continued again, and they look like they will continue to continue.

Throughout the year, the dialogue became something of a safe space for those trying to keep up to speed with events in Kosovo – in the midst of the maelstrom, the dialogue’s predictable banality, its slow drip-feed of nothingness, was a welcome respite for all seeking shelter from the winds of change howling elsewhere.

What are you talking about?

Writing about the Kosovo-Serbia talks in 2009 Vjosa Musliu noted, “…confusion reigns as to whether officials from the respective capitals will attend, whether they will go as equals, and what they are supposed to discuss.” Over 11 years later this confusion remains, especially over the point of the talks.

The US’ ham-fisted attempt at brokering a deal between Belgrade and Prishtina may have ended in farce, but it did at least appear to shock the EU into taking a more proactive approach lest they lose the limelight to Washington.

So, the dialogue resumed, ostensibly reinvigorated, but what does it aim to achieve? Apparently, the aim is…“normalization”. Hardly the most inspiring rallying cry, but one repeatedly uttered anyway by EU envoys.

What does it mean? The primary focus within the dialogue at present appears to have something to do with the 2013 agreement between Belgrade and Prishtina to establish the Association of Serbian Municipalities.

But the dialogue used to be about more ambitious projects didn’t it? At one point it appeared to be about reconciliation – as symbolised by the building of a “peace park” on the bridge across the Ibar in Mitrovica – but the architect behind that plan, Federica Mogherini, soon preferred the idea of an ethnically-based land swap, though no-one wants to speak about that anymore.

There also used to be some talk that the dialogue was about mutual recognition, but this also appears to have been quietly removed from the agenda.

Of course, those urging Prishtina to “make progress in the dialogue” have often whispered tantalisingly about visa liberalisation if they do. But there have been way too many “visa-liberalization-is-just-about-to-happen” parties in Kosovo for anyone to fall for that trick, especially given France’s overt hostility to the idea.

A myriad of interests (just not Kosovo’s)

The EU clearly has interests at stake – primarily it wants to prove it’s more than just a slowly fragmenting alliance of increasingly antagonistic “allies.”

Thus, desperate to prove it still has some worth after Brexit, enlargement fatigue, internal disunity, the rise of populism and the accompanying shift towards authoritarianism among its members, Brussels has dispatched its envoys to achieve something – “anything!” – in the Balkans.

The EU is also, of course, keen to ensure the dreaded Russians don’t sink their claws deeper into the region, and so they are increasingly keen to show that they love Serbia just as much as Moscow, and have much deeper pockets.

As the EU has sought to seduce Serbia no matter how authoritarian Vucic becomes, Belgrade has enthusiastically seized the opportunity to wring as many concessions out of the increasingly fawning Brussels as possible. At Serbia’s behest, the EU has gradually pushed certain issues down the dialogue agenda, particularly reparations for past crimes, mutual recognition, and the cessation of Serbia’s de-recognition of Kosovo campaign.

The dialogue has, therefore, lost any semblance of importance precisely because the goal now is to contrive a means by which the two parties will agree to something – anything – that enables the EU to herald its own diplomatic skills, and allow Serbia to present itself as having ‘normalised’ its relationship with Kosovo (which in fact means the status quo continues) and thus join the EU.

The real point of the dialogue then, has nothing to do with Kosovo. The goal – “normalization” – means, in simple terms, that the EU wants to facilitate Serbia’s accession – although France and the Netherlands still have reservations about enlargement – and for Kosovo to fade into the background, unresolved but not problematic.

That Kosovo, once the subject of so much international support has now reached the point where its erstwhile allies envisage it becoming the new Transnistria is remarkable.

Under the brief Kurti government, some concrete steps were taken to change the nature of Kosovo’s strategy towards the dialogue. Chief among them was the resolution adopted by the Assembly recognising that the Government, rather than the President, has the constitutional right to lead the negotiations with Serbia.

While this was intended to wrest control away from then President Thaci to Prime Minister Kurti, and hence imbue the Kosovo delegation with inherently more legitimacy, Richard Grenell’s later mendacity ensured that it was Prime Minister Hoti who led Kosovo forward.

Presiding over a government with dubious legitimacy, and with little in the way of any charisma, the sight of Hoti smiling politely at a patronising Vucic has hardly inspired much confidence that Kosovo is on the cusp of achieving anything significant.

Given the EU’s aims are overwhelmingly focused on acceding to Serbia’s wishes, it is not clear why Kosovo is even taking part in the dialogue. The dynamics have changed remarkably in the last ten years and Kosovo cannot allow the balance to continue to tip in Serbia’s favour.

Instead, a much more robust approach should be adopted, one which insists that the issues of mutual recognition and reparations are addressed. In reality, upsetting Brussels is not actually going to impact Kosovo’s accession to the EU, given this is essentially impossible to achieve at present.

Kosovo’s next government needs to provide a fresh approach to the dialogue, and the nature of the talks may have to alter substantially, and most likely in a way which displeases Brussels and Belgrade. But given the situation Kosovo finds itself in, and the path towards stasis it is currently being pushed down, what has it got to lose?