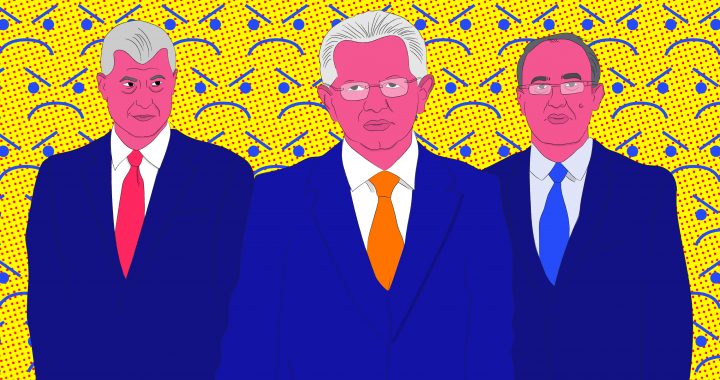 Dissatisfaction with the delegation representing Kosovo in the Brussels negotiations with Serbia hit new heights this week, with even parties in government objecting to the appointment of Skender Hyseni as State Coordinator for the Dialogue.

Just hours before Skender Hyseni, the newly appointed State Coordinator for the Dialogue, met his Serbian counterpart in Brussels on Thursday, leaders of Kosovo’s governing parties were publicly decrying the country’s representatives in the talks.

In a televised interview on Wednesday night, Ramush Haradinaj, the leader of Alliance for the Future of Kosovo, AAK, expressed his discontent over the absence of representatives from his party in the country’s delegation to the dialogue. He also revealed that Hyseni’s appointment was not discussed between the parties making up the coalition government, and questioned Prime Minister Avdullah Hoti’s attempts at building political consensus.

“If [Hoti] does not trust the Alliance [for the Future of Kosovo], who he is in coalition with, then why should the opposition trust him?” Haradinaj asked rhetorically, adding that a unilateral approach to governance could not continue.

The AAK leader’s fury over the lack of coordination surrounding Hyseni’s appointment was soon echoed by Fatmir Limaj, the leader of NISMA, another member of the coalition government. Limaj stated that he was not informed about the creation of the position of state coordinator or the nominee, and condemned the unilateral appointment of Hyseni.

Signs of discord between the governing parties on the dialogue had already appeared earlier in the week, when Hoti invited the leaders of all the political parties represented in the Kosovo Assembly to a meeting to discuss the new phase of the Brussels talks. Tuesday’s meeting was boycotted by opposition party leaders, but Haradinaj and Limaj also failed to attend, sending party officials in their place.

The one person welcoming the State Coordinator to his new position was President Hashim Thaci, who declared Hyseni’s appointment a product of “inter-institutional coordination.” This suggests that even though Hoti reportedly ignored his coalition partners in hiring Hyseni, the president may well have been part of the consultation process.

Thaci added that he is convinced that Hyseni “will manage to build the necessary political consensus between the government and the opposition for the benefit of the Republic of Kosovo.” Meanwhile, both Thaci and Hoti have emphasised the importance of Hyseni’s role, claiming that as State Coordinator for the Dialogue he will negotiate and draft the “final political agreement between Kosovo and Serbia.”

However, Hyseni’s allegedly unilateral appointment has already caused ruptures in Kosovo’s coalition government and only deepened internal political divisions when it comes to the Kosovo-Serbia dialogue.

The absence of an internal political consensus on the dialogue has been damaging to Kosovo’s international reputation for years now, and has led to a failure to ratify agreements and brought down multiple governments. Continuing with a state coordinator responsible for negotiating a final agreement who lacks political support can only exacerbate this situation and endanger any agreement reached.

The chances of passing an agreement negotiated by Hyseni through the Kosovo Assembly already look remote with such little political support for his appointment. This is not an issue shared with Serbia, where despite waves of protests and cracks in his legitimacy appearing in recent months, President Aleksandar Vucic still wields uncontested political power.

The current approach to the dialogue being employed by Kosovo also seems to lack transparency once again, with the public and affected groups left in the dark about what is happening not only behind closed doors in Brussels, but even within the Kosovo delegation.

Thursday’s meeting in Brussels was expected to include discussions on the fate of persons still missing from the Kosovo war. In the hours preceding it, Thirrjet e Nenave, [Mothers’ Call] an association representing the families of the missing made a public statement criticising the government’s lack of inclusivity within the dialogue delegation, describing family relatives of the missing as “the most affected and ignored category.”

Hyseni’s late appointment also reveals the lack of preparation among the Kosovo delegation going into this meeting. Hoti first announced the position of a ‘State Coordinator for the Dialogue’ on Monday, just three days before the meeting, while Hyseni was only confirmed in the position on Tuesday afternoon.

One of the few notes of consensus among Kosovo political parties was the need for a “well prepared dialogue”, yet during one of the first meetings in 18 months, Kosovo was represented by a man hired for the position less than 48 hours prior.

Disputes over Hyseni also expose the fragile nature of Kosovo’s current government, and demonstrates that the ability to form a government does not automatically translate into the ability to build consensus. While “the need for consensus” is an easily repeatable slogan in opposition, actually reaching one is more difficult while sitting on the throne.

The government’s position is already delicate in terms of numbers in the Kosovo Assembly, commanding a majority of just one vote, leaving it vulnerable to collapse. If the situation deteriorates between the current coalition partners, it will also inevitably impact on the dialogue.

Kosovo has already lost one PR battle, with the US and EU largely blaming successive Kosovo Governments for the 18-month long impasse in the dialogue, as evidenced by attempts to ensure Kosovo drops its tariff on Serbian imports being pursued much more forcefully than attempts to halt Serbia’s de-recognition campaign. Any breakdown in talks this time around due to failings on the Kosovo side will only weaken their negotiating position further.

In the meantime, if Hoti’s unilateral actions in the dialogue continue and if he fails to build consensus – first with his governing partners and then with the opposition – then Kosovo’s endeavours within the Brussels dialogue are doomed to fail.