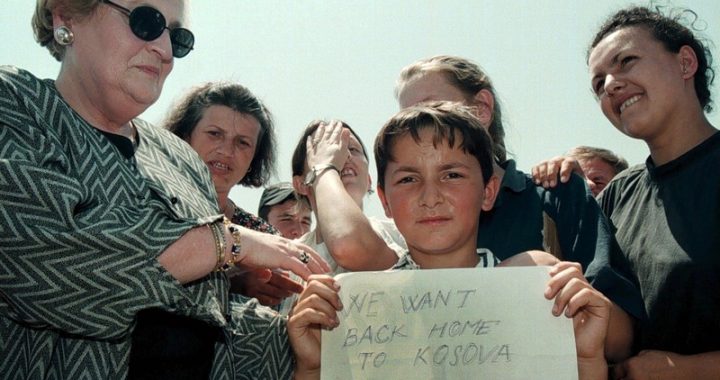 US Secretary of State Madeleine Albright with ethnic Albanian refugees at a wartime refugee camp in Stenkovec near Skopje, June 1999. Photo: EPA/STRINGER.

Kosovo's leaders expressed sorrow after the death of former US Secretary of State Madeleine Albright, who they see as a hero for helping to drive out Serbian forces during the 1999 war.

As the news of the death of former US Secretary of State Madeleine Albright broke on Wednesday evening, many Kosovo Albanians took to social media to commemorate the diplomat who is considered one of Kosovo’s greatest friends for her role during the 1998-99 conflict which saw the end of Yugoslav rule over the territory.

“Her contribution to our freedom & democracy will never be forgotten. With her work, she left this world a better place. RIP dear friend,” Osmani added.

“Saddened to hear of the passing of Madeline Albright, a remarkable woman with uncompromising morals for the United States, a friend of Kosova to the end, and a partner with all who pursued peace, freedom and democracy,” Kurti said.

Pandeli Majko, an Albanian politician who served as prime minister during the 1999 war in Kosovo, called Albright a “special friend of the Albanian nation”.

“Almost three years ago, we took our last trip together to celebrate the 20th anniversary of Kosovo’s fight for independence, when they dedicated a statue of her in downtown Pristina. She had a richly deserved happy day,” Clinton said in a statement.

Born in Prague in what was then Czechoslovakia in 1937, Albright spent her early childhood life in Belgrade, where her father Joseph Korbel was serving as a diplomat.

In 1948, her family emigrated to the United States and 49 years later she became the first female Secretary of State.

In her position as Secretary of State in the Clinton administration, Albright played a key role in NATO’s 78-day bombing campaign in 1999 to end Yugoslav President Slobodan Milosevic’s forces’ campaign of repression and ethnic cleansing against Kosovo Albanians.

The Western alliance began bombing Yugoslavia after diplomatic negotiations failed when Milosevic refused to sign a peace agreement because it envisaged NATO forces being deployed in Kosovo, which it said would become an autonomous province within Yugoslavia.

NATO described its campaign as a ‘humanitarian intervention’. The alliance launched the military operation without the approval of the UN Security Council, as Serbia’s ally Russia strongly opposed the intervention.

Many people in Serbia see Albright as an arch enemy of the Serbs and hold her responsible for the NATO bombing. Some Serbs took to social media on Wednesday night to celebrate her death.