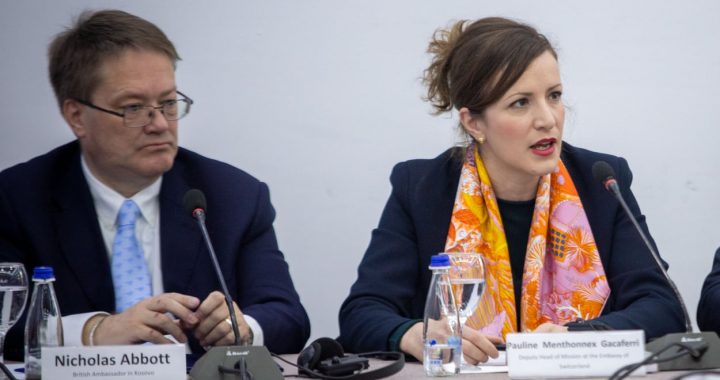 Justice institutions in Kosovo filed only one indictment last year for war crimes committed in 1998-99, according to the latest report of the Humanitarian Law Center, Kosovo, HLCK, on Thursday.

A project coordinator at the Humanitarian Law Center in Kosovo, HLCK, Amer Alija, said that only two people were arrested in 2021 on suspicion of war crimes, while a total of five cases of war crimes against civilians were prosecuted, concerning six defendants.

Alija said efficiency in the prosecution of war crimes was far from satisfactory.

British ambassador Nicholas Abbott said the investigation of war crimes in Kosovo could be accelerated if cooperation was achieved between the justice institutions of Kosovo and Serbia.

“More can be done by establishing better legal cooperation with justice institutions in Serbia, and by engaging support staff who have good analytical skills and who are able to handle old cases, in particular those sent by EULEX in 2018,” Ambassador Abbott said, referring to the EU Rule-of-Law mission.

Abott said a big challenge for justice is that many of the perpetrators of the crimes are now dead, or not in Kosovo.

“Many survivors are dead, or too old, which can make interrogation unbelievable and difficult. Some of them are not in Kosovo, either. The family members [of victims] is that the perpetrators be imprisoned,” he said.

Since the war in Kosovo ended in 1999, about 70 people have been convicted of war crimes by the local and international courts. During the war, more than 13,000 people were killed and another 1,600 are still missing.

The head of the War Crimes Department within the Kosovo Special Prosecution, Drita Hajdari, said investigating and prosecuting war crimes remains a challenge due to the lack of the physical presence of many defendants.

Hajdari added that,. although Kosovo law allows for trial in absentia, verdicts are almost unenforceable in such cases.

According to her, over 1,000 war crimes cases are pending.

The last time an indictment for war crimes in Kosovo was filed was on March 29, against a defendant named as M.A, of Albanian nationality, residing in Belgrade, Serbia.

According to the prosecution, this case concerns the massacre that took place on March 28, 1999, in the village of Izbica, Skënderaj municipality.

The prosecution said it had taken testimonies from 100 witnesses and victims, and has secured material evidence, such as video recordings and autopsy reports from the massacre site.

From 2000 to 2008, war crimes in Kosovo were investigated by the United Nations Mission in Kosovo, UNMIK. Since 2008, the EU Rule-of-Law Mission EULEX has been responsible for investigating war crimes.

EULEX completed the process of submitting files to the prosecution and local courts in 2018. These cases are now in the hands of prosecutors and judges of Kosovo institutions.