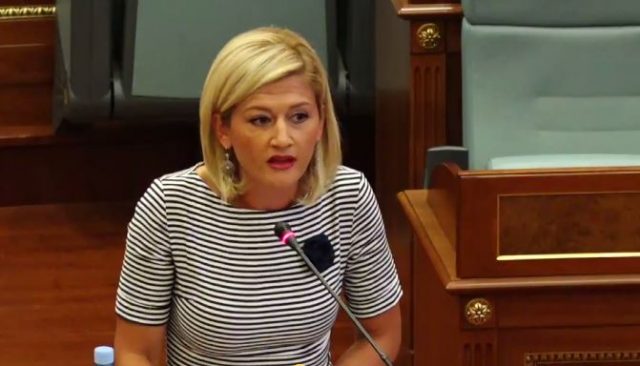 Two Kosovo MPs are calling for the establishment of an investigative commission to inquire into high-level appointments that violate an external British vetting process.

President and MP of Alternativa Mimoza Kusari-Lila and Vetevendosje MP Dardan Sejdiu are calling for the establishment of an investigative commission to look into the appointments of high-ranking civil servants in public institutions. The two MPs began collecting signatures on Tuesday to call the government into a plenary session.

Less than two weeks ago, a consortium of local NGOs, including GAP Institute, the Group for Legal and Political Studies, INDEP and others issued a statement demanding that the Kosovo government revoke its decision to name Burim Rrecaj as a Secretary General of the Ministry of Trade and Industry. The organizations found that Rrecaj, a former political candidate for NISMA, was appointed in complete violation with the vetting process done by an external British company, financed by the British Embassy after a memorandum was signed with Kosovo in October last year.

Kusari-Lila told BIRN that the initiative to establish a parliamentary commission to look into the appointments of high-ranking civil servants is a result of a series of violations made by the Kosovo government.

“We have noticed continuous violations by Kosovo’s government, and politicization and nepotism in leadership positions. We are requesting a session in order to prevent the escalation and exacerbation of the structure of public administration,” Kusari-Lila told BIRN.

According to the MP, she and Sejdiu hope to bring forward a resolution that would obligate the government of Kosovo to review all decisions made so far regarding appointments and handle them according to the agreement they have with the United Kingdom.

“The memorandum with the United Kingdom is not lacking, but it is not being taken seriously by the government; they say that it is not a legal obligation. If it isn’t, then they should publicly withdraw from that agreement. They do not need to deceive themselves or the public opinion by saying that they have a memorandum and that they are interested to have professional public servants while they are doing the opposite,” Kusari-Lila said.

Kusari-Lila warned that Kosovo might lose 75 million euros of financial support from the EU if “the poor trends of the Haradinaj government” continue.

“Kosovo risks losing 75 million euros of direct assistance for its budget for administrative reform from the EU. Some weeks earlier, EU high officials told us that if this trend–which started very poorly with Haradinaj’s government–continues, then it is only a matter of days before the funds are withdrawn from Kosovo because of a lack of seriousness in this process,” she said.

“If we are able to form the commission through a decision of the Assembly, it would look into all these processes. It would verify the professional qualifications of the chosen candidates and it would of course give recommendations, notices, and eventually annul the vacancy notices that have been fulfilled, or have been filled with politically-chosen people,” she said.