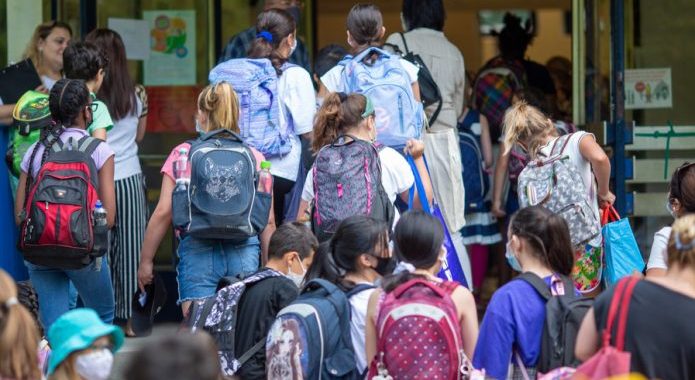 Kosovo schools to open in September

The Ministry of Education has told BIRN that primary and secondary schools in Kosovo will open from September 1, six months after the government shut down all schools in the country to mitigate the spread of coronavirus.

The Kosovo Government has decided to reopen all of Kosovo’s public primary and secondary schools from the beginning of September, announced Rame Likaj, the Minister of Education, Science and Technology.

Schools in Kosovo have been closed since 13 March, the date that the first recorded cases of coronavirus in the country were announced.

Following a meeting with municipal leaders on Thursday, Likaj announced that schools would reopen  in three stages throughout September.

“The new school year will start on 1 September for preschool children and pupils in first, second, third, sixth and ninth grade, for grades four and five class with begin on 7 September and on 10 September, grades seven, eight, nine, ten, eleven and twelve will begin teaching,” said Likaj.

The government is yet to finalise its decision on the plans for health and safety measures to protect staff and pupils, Likaj added, stating that there were three possible scenarios to be presented to the government at its next session.

‘Scenario A’ would see a complete return of all pupils to school premises, he said, while ‘Scenario B’ would introduce “combined learning,” meaning that pupils would attend classes at school several days a week and stay at home for others. ‘Scenario C’ would move classes to distance learning platforms completely, Likaj said, adding that the government is preparing for distance learning to be available for those at risk of contracting COVID-19.

The Union of Education, Science and Culture of Kosovo, SBAShK, demanded on Wednesday that the reopening of the schools be postponed until mid-September at least in order for all education staff to be tested for COVID-19 before teaching begins.

“The minister has told us that there are tests, but there is no space to do the tests for teachers,” said Rrahman Jasharaj, the head of SBAShK. “All staff working in the education system that will go back to schools on 1 September should be tested, so that we know whether or not we are sending teachers into schools with COVID-19.”

Education expert Rinor Qehaja, the head of the EdGuard Institute told BIRN that reopening schools would inevitably increase the risk of spreading the virus, and called on state institutions to ensure a safe environment for teachers and pupils.

However, Qehaja added that he believed the benefits would outweigh the costs. “The pandemic should not distract us from ensuring quality education,” he told BIRN. “I hope that the return of schools will alleviate the damage caused by a long period away from education.”

Since April, the Ministry of Education has been implementing a remote learning system for Kosovo pupils from first to ninth grade, with hundreds of classes in all of Kosovo’s official languages televised through Kosovo’s Public Television, RTK.

Former Minister of Education Hykmete Bajrami noted following the launch of the remote learning syllabus that its implementation was a challenge for the government. “We weren’t prepared for distance learning,” said Education Minister Hykmete Bajrami. “This is the best we’ve been able to do in such a short period of time and with the support of many volunteers.”

In addition, resorting to distance learning has laid bare deeper socio-economic problems faced by communities in Kosovo. According to a report published in July by Admovere, a Prishtina-based NGO, many children belonging to the Roma, Ashkali and Egyptian communities have been unable to participate in remote learning due to their inability to access the internet or television.

Since March, a total of 12,840 recorded cases of coronavirus have been confirmed by Kosovo’s health institutions, while 492 people that contracted COVID-19 have died.

Editor’s note: This article was amended to include the response of Rinor Qehaja.