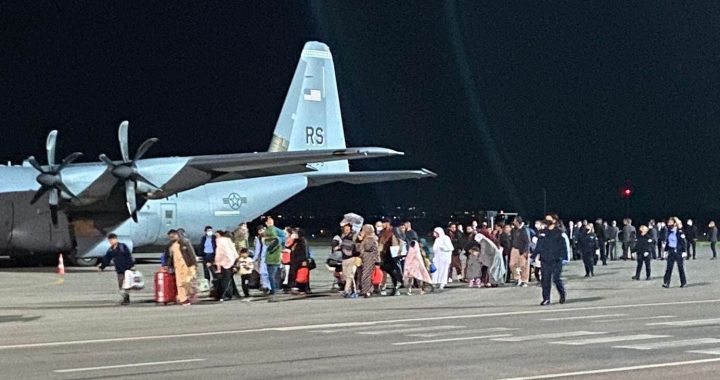 Kosovo ‘Will only give refuge to at-risk Afghan refugees’

As more Afghan refugees are given refuge in Kosovo, the government has rejected a report by right-wing media outlet Fox News that the US is sending those who have been "flagged for criminal or terror ties".

The Kosovo government has denied media reports that Afghan refugees who have not passed the initial vetting to be allowed into the US will be given refuge in the country, as more evacuees are expected to arrive in the coming weeks.

Right-wing US media outlet Fox News reported on Monday that US officials had told it that “Camp Bondsteel, a US military base in the Balkan country of Kosovo, will temporarily house Afghan refugees who don’t pass the initial round of vetting”.

Fox News also claimed that the US is sending “any Afghans flagged for criminal or terror ties to Kosovo”.

The Kosovo government and the US embassy in Pristina insist however that Kosovo will only shelter Afghan citizens who are at risk due to their collaboration with the US and NATO.

In a press release on Saturday, the US embassy in Pristina said that the agreement between the US and Kosovo “allows the US to temporarily shelter… a limited number of Afghan citizens, whose applications (for visas in the US) require additional processing”.

“Some media reports have left readers with the incorrect impression that the United States intends to transfer to Kosovo individuals whom US authorities have deemed inadmissible to the United States. This is not the case,” the embassy said.

It further explained that the agreement between the US and Kosovo allows the US to “temporarily host at Camp Bondsteel, a limited number of Afghan citizens whose applications require additional processing”.

“This may include tasks such as: clarifying applicants’ identities, their employment history, or other ties to the United States. US Embassy officials in Kosovo are assisting in this process,” the press release said.

Kosovo government spokesperson Perparim Kryeziu told BIRN on Tuesday said that “we have nothing to add to the explanation given by the American embassy”.

Around 700 Afghan refugees out of the 2,000 that Kosovo is expected to shelter have already arrived, according to Interior Minister Xhelal Svecla.

On Monday, Kosovo Prime Minister Albin Kurti spoke to US Secretary of State Antony Blinken to discussed the hosting of the Afghan refugees.

“Kosovo is honoured to offer a safe and secure environment for Afghan citizens during their transition. Our alliance with the US is unwavering and our friendship is growing stronger,” Kurti wrote afterwards on Twitter.

Blinken wrote on Twitter that he “thanked the government and people of Kosovo for hosting at-risk Afghans”.

“Kosovo citizens, many once refugees themselves, have again demonstrated their willingness and capacity to contribute to global peace and security,” he said

Afghan refugees arriving in Kosovo are granted a one-year residence permit and are currently staying in a former camp built by the US-Turkish construction company Bechtel Enka situated in front of the US military base Bondsteel.