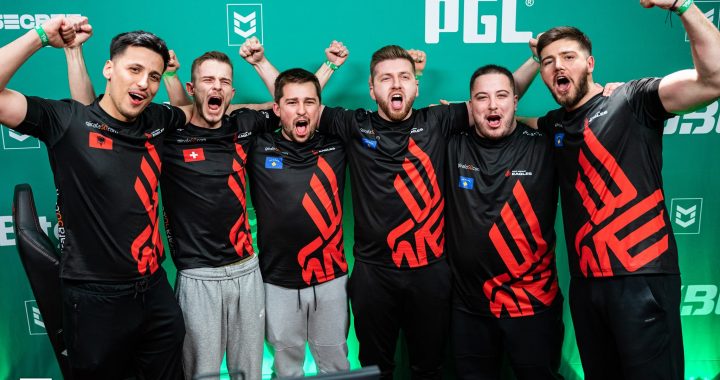 ‘Bad News Eagles’ has become the first Kosovar team to qualify for the most prestigious competition of the video game, which this year takes place in Belgium in May.

For coach Klesti Kola everything about Counter Strike had started as a fun time activity, playing every day with his friends.

But over time, seeing that they have more skills than others, Kola says for Prishtina Insight that he had started to take it seriously and “we start to think that we can really do the profession.”

“Working every day, with discipline and passion and working in other mental aspects we have reached this point when we are competing with world teams,” he said.

Their team, Bad News Eagles, on Sunday secured participation in the biggest Counter-Strike competition, which this year takes place in Antwerp, Belgium. The CS: GO Major tournament runs from May 9 to May 22.

According to him, achieving this great success was simply a matter of time because for years each of the boys has worked to reach this point.

Kola shows that the road to triumph has been difficult and especially recently because they have not had support.

The Kosovo team is also the first to join the Major league without having an organization to represent them.

“However, we have not given up and we have managed to represent Albania and Kosovo with dignity in international championships, even without proper organizations,” he said.

After this success, their goal is to reach the next stage of the Major in the legends Stage, in which they can provide invitations for the next major.

“We will focus step by step, round by round, game by game and we will give our best performance and represent ourselves as best we can and show everyone that we have yet to reach our potential,”  he added.

As the tournament rolls around, 24 teams will compete to lift one of the esport’s most coveted trophies before a massive crowd.

Teams will be playing for a total prize money of 1 million US dollars, to be divided among the top teams, the first of which will win half-a-million dollars.

The Bad News Eagles’ entry into the competition was secured by their 2:1 win over Czech team SINNERS in Bucharest, Romania.

Counter-Strike is a series of multiplayer first-person shooter video games. Teams of terrorists battle to perpetrate an act of terror while counter-terrorists try to prevent it. The series began on Windows in 1999 with the release of the first game, called Counter-Strike.

Kosovo Prime Minister Albin Kurti hailed the team’s success: “I rejoice in every achievement of our youth. They are proving to us every day that when passion and work are combined, success is guaranteed,” he wrote on Instagram.

The Minister of Culture, Youth and Sports, Hajrulla Çeku, also congratulated the team, and said he was proud of their success.

The veteran leader of one of the best teams in the world, team Vitality, Dan Madesclaire, congratulated the Kosovo team on Twitter: “I must congratulate the Bad New Eagles! Nice story guys.”