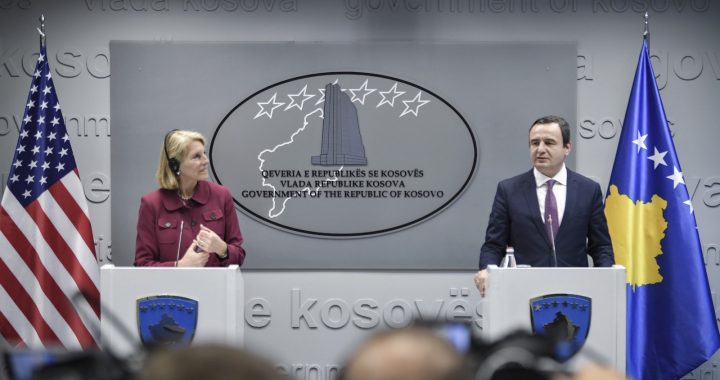 Kremlin moves to foment chaos in the region will be limited if Kosovo and Serbia resume dialogue, US Assistant Secretary for European and Eurasian Affairs Karen Donfried told leaders in Prishtina.

Donfried said better relations between Kosovo and Serbia would limit Russia’s ability to divide, create fear and incite chaos in the region.

“The best way to counter the Kremlin’s flagrant attempts to destabilize the region is simple: Kosovo and Serbia must urgently unite and re-engage in the EU-facilitated dialogue, with strong US support,” Donfriend said.

Kurti told a post-meeting conference that it was unfortunate that Serbia refused to sanction Russia over its aggression in Ukraine, adding that countries that have imposed sanctions on Russia should be allowed to join NATO and the EU.

According to him, a rejection of sanctions indicates an orientation towards and an alliance with autocrats.

“In order to maintain peace and security, NATO and EU integration is necessary for countries that have imposed sanctions on Russia,” Kurti said.

Another visit by three US senators touring the Balkans confirmed US support for Kosovo.

Senator Murphy wrote on Twitter before the start of the visits that, as Russia loses the war in Ukraine, it will seek other troubles in other areas.

“As Russia continues to lose in Ukraine, they will look to make trouble in nearby fragile regions. I’m in Serbia, Kosovo, and Bosnia this week with Senator Shaheen and Sen Thom Tillis to strengthen US ties to the Balkans in the face of foreign efforts to undermine peace ”, he wrote.