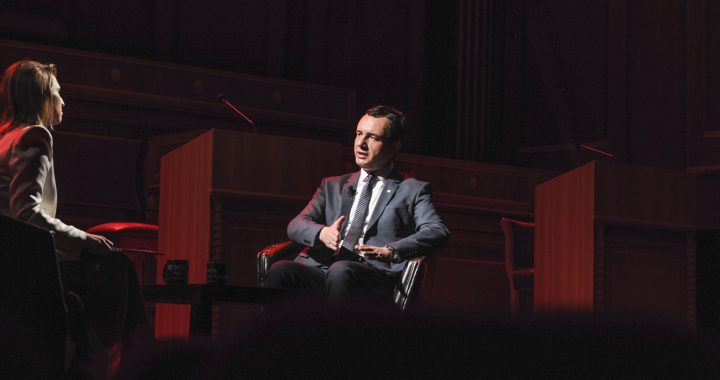 Albin Kurti, Vetevendosje’s former leader and the party’s PM candidate, known for obstructing Assembly sessions with whistles and teargas to stop the demarcation and Association agreements, was nevertheless eager to talk about social policy and economic development when we sit down to talk to him for the last #DebatPernime.

“We will focus on the pits in our stomachs, and then on the holes in the roads,” declared the 42-year-old candidate representing what was Kosovo’s biggest opposition party in the 2014 elections.

“Fifty-eight million euros will be allocated towards child benefits. Do you know how much free meals cost for the entirety of Kosovo? Only 12 million euros, which is only one kilometer of asphalt.”

In a sit down interview airing two days before Kosovo citizens go to the polls this Sunday, Kurti discussed his party platform, the controversial demarcation deal with Montenegro, and his criticisms of the Kosovo Specialist Chambers.

Kurti criticized the Specialist Chambers, an internationally-staffed Kosovo court expected to indict high officials and former Kosovo Liberation Army commanders for crimes committed during and after the Kosovo war. Vetevendosje vehemently opposed the establishment of “the special court,” which was mandated by the Kosovo Assembly in June 2015.

“The special court is an edifice, not entirely clearly envisioned even by those who initiated it… we will start talks with international community immediately, because there’s a lack of transparency about what the objective of this special court is.”

With a Vetevendosje government, we will immediately begin to fight corruption, and Kosovo citizens will gain trust in our courts again… we need to liberate the judiciary and the prosecution from the executive branch.”

Kurti focused the bulk of his interview on his plans for serious social democratic reforms.

A Vetevendosje government, Kurti pledged, would bring 4,000 social housing apartments for low-income households, 160 kindergartens throughout the country, a free meal program for first through fifth grade students and other child benefits, and a state health insurance system.

In response, moderator Xharra suggested that these social schemes are reminiscent of failed Yugoslav policies.

“Yugoslavia failed because of Serbian hegemony and internal inequalities. In Kosovo we will follow the social welfare state model of continental Europe, from Switzerland to Scandinavian countries. This has nothing to do with Yugoslavia.”

Kurti also laid out plans for an apolitical Sovereign Fund, which would turn all socially owned enterprises that are managed by the Kosovo Privatization Agency into joint stock companies, with the Sovereign Fund as the main shareholder. Correspondingly, a Development Bank would offer “soft long-term loans with low interest rates under three per cent for over 20 years” for small and medium-sized businesses.

Vetevendosje is often accused of having Albanian nationalist policies and rejecting Kosovo state symbols. Asked about which flag a Vetevendosje government would fly, Kurti responded:

“We’re more about the content than the superficial – the packaging. We have never harmed the Kosovo flag. As the chairman of the commission on foreign affairs, I had the Kosovo flag on my desk.”

On ethnic-based decentralization, Kurti said “we cannot have something similar to [Bosnia’s] Republika Srpska in Kosovo.” He promised that Vetevendosje would begin dialogues with all Kosovo minority communities to activate integration.