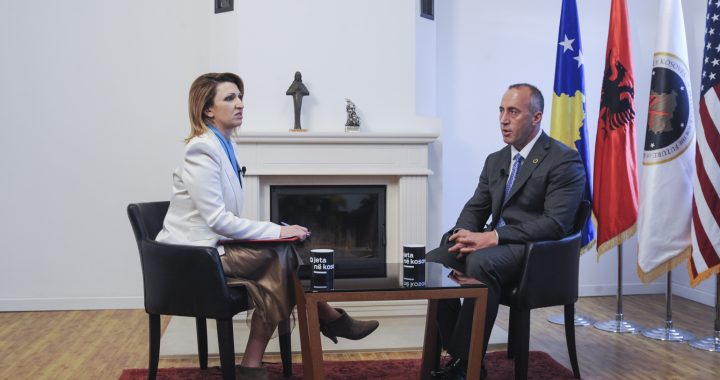 Haradinaj: Kosovo no longer belongs to the tricksters

In the eleventh hour, just minutes before the Central Election Committee, CEC, would close the window for registering pre-electoral coalition, Ramush Haradinaj’s Alliance for the Future of Kosovo, AAK, brokered a deal to create a ‘war faction’ coalition with the Democratic Party of Kosovo, PDK, and the Initiative for Kosovo, NISMA.

It was a coalition of necessity, PM candidate Haradinaj described in an interview for #DebatPernime two days before Kosovo’s snap elections take place on Sunday.

“I’m not helping a PDK government, but I’m working for a common government. It’s an honor that PDK bestowed to me. We tried to ensure change with other partners… LDK showed that it is unstable, and Vetevendosje is not serious,” he said.

Over the past year, Haradinaj’s former opposition party engaged in protests both inside and outside of the Assembly to oppose the very same deals that its new coalition partner PDK was trying to pass.

But now, he insists that the PDK-AAK-NISMA coalition’s joint program is harmonized, with a focus on agriculture and farmers.

“Certainly every party has people with their specific points of view, but we have harmonized our programs. In implementing it, we will increase the budget more than anyone else ever has,” he said, later adding that the coalition would ensure Kosovo’s minimum wage to be raised to 200 euros.

Another point of primary focus, he said, is health care. Despite a law passed in 2014 that was supposed to pave the way for public health care, Kosovo still lacks a national health care system.

“The government of this country will be there to serve. Health care will be the first focus – because we all are patients, and health care is in a bad state,” Haradinaj said.

Although he said that it was not the government’s job to play detective and inspect previous governments’ deeds, he did affirm that he was interested in creating and maintaining a state of justice.

“My focus is the state of justice and expanding the jurisdiction to northern part of the country,” said a resolute Haradinaj.

Like Vetevendosje’s Kurti, Haradinaj also promised that his government would renegotiate the contentious border deal with Montenegro and establish a new review commission.

“The new Kosovo commission will review the process in entirety, and we believe that we need to renegotiate with Montenegro – the border is in Qakorr,” said the former prime minister.

Haradinaj served as PM for only 100 days after the 2004 elections before he resigned to fight his war crime indictment from the International Criminal Tribunal for Yugoslavia in the Hague. He was acquitted by the international court twice.

As a former Kosovo Liberation Army, KLA, commander, who to this day is wanted in Serbia for war crimes, Haradinaj and his party opposed the ratification of the Specialist Chambers, a new international court that is expected to indict KLA members for war crimes committed during and after the Kosovo war.

Nevertheless, Haradinaj believes that since the Assembly ratified the establishment of the Specialist Chambers, the decision must be respected.

“This was an unjust decision towards Kosovo, I do not know how it got to here–this is an act of discrimination towards victims. I did not vote for it, and neither did any other AAK MP. But the decision needs to be implemented.”

Talking about the coalition’s platform, Haradinaj said that they had a list of 100 priorities for the first 100 days.

“The first three are internal for the government – defining what norms and rules we will work with. The second has to with measures for the health sector; our third priority is the economy,” said Haradinaj, before adding that Kosovo is bound to change when his government comes to power.

“Kosovo tomorrow will no longer be the same as today. Tricksters and fraudsters, those who pretend that they work, Kosovo no longer belongs to them.”