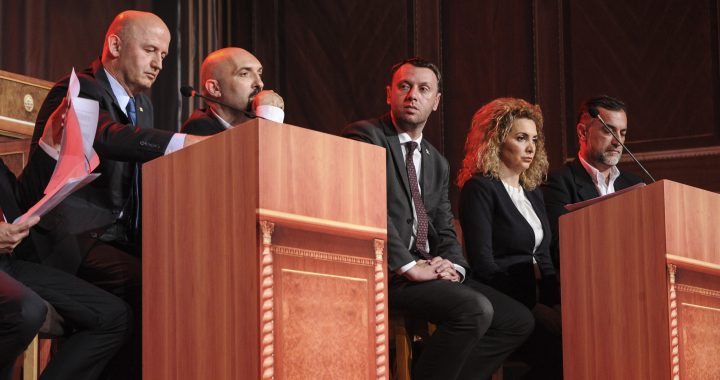 The seventh #DebatPernime brought together former ministers and health experts in a mild-mannered but hefty policy debate on health and social policy in Kosovo.

The debate kicked off with parties presenting their platforms, with LDK-AKR-Alternativa, or the LAA coalition, saying that the health sector will be their priority.

“We will increase the budget and the salaries of health sector employees. We also plan for a regional hospital for Prishtina, because Prishtina needs one like every other region,” said Albena Reshitaj from the New Kosovo Alliance, AKR.

Numan Balic, a candidate of the Democratic Action Party, SDA, and Kosovo’s first Minister of Health, said that health should be declared a national priority by the next prime minister.

“If this doesn’t happen, no strategy will help us because it always remains only on paper,” he warned, adding that the budget must be at least doubled.

Representing PDK-AAK-NISMA, or the PAN coalition, Talat Gjinolli, a doctor and AAK candidate, said that the primary emphasis should be put on reforming the current network of health institutions.

Although the Assembly passed a Law on Health Insurance back in 2014, the Ministry of Health has yet to start collecting premiums to establish the Health Insurance Fund. The national insurance scheme is supposed to operate through state collection of employee-employer paid premiums. Initially, the premiums were supposed to start being collected in January 2017, but it was postponed to July. With the passing of the no-confidence motion in the government, the date has been postponed once more.

Vetevendosje’s Shkreta said that the public health insurance scheme could not be implemented without a Health Information System.

“This would include some modalities such as the price list, the list of services, the registry of medicines,” Shkreta explained.

“The new public health insurance system would start as soon as we would ensure the right equipment and conditions,” promised Vetevendosje’s Ulaj.

Meanwhile, Alternativa’s Albert Lila said that the public health insurance scheme would be launched in September. Echoing Vetevendosje, PAN’s Gjinolli responded that they could not promise the implementation “without determining the modalities like the price list and service list.”

“There is a price list, there is a list of services,” Abrashi insisted, affirming once more that the premium collection would begin in September as soon as LAA comes into power.

Abrashi’s statement drew further criticism from Ulaj, who claimed that the government was planning to collect money without a strategy.

“Collecting money from citizens without a strategy is a violation of their rights,” said Ulaj, referring to the plan to collect premiums for six months before the Health Insurance Fund can start to cover for health care services. “The budget should put up a sum of money for the health insurance as a premium, and only afterwards the government should start collecting from people.”

Haskuka said that Vetevendosje also planned to increase basic pensions to 150 euros and contribution pensions to 280 euros, with youth helping to pay for older generations. He also promised the party would introduce child benefits of 10 euros per month for every child under 15 years of age, and establish life insurance for the police force and firefighters.

Arban Abrashi from the LAA coalition also said that Kosovo’s pension system will be in focus.

“We will create the Pension Fund, an additional fund that will increase basic pensions by 40 per cent,” Abrashi said. “Those who work will pay for those who are retired.”

The conversation then turned to the issue of Kosovars receiving their contribution pensions from Serbia, which were wrongfully terminated after the war.

Pulling out two pieces of paper, Abrashi said that he was holding two cases that have won the right to their pensions in the Strasbourg-based European Court of Human Rights.

“We have started the process for the return of pensions from Serbia, and it will be raised in the dialogue with Serbia,” said Abrashi.

Abrashi’s statement was met with criticism from Haskuka, who took the floor to point out some inaccuracies.

“[The government] never opened the pension issue in the dialogue. With regards to Strasbourg, people were dissatisfied and sued Serbia themselves, the government didn’t help,” said Haskuka, before adding that in fact, the ministry’s policy to have people report every six months to get their pensions was a violation of the law.

On the minimum wage, Abrashi from the LAA coalition said: “We believe that in the first week of our government, the minimum wage will be set at 210 euros for the entirety of Kosovo’s private sector.”

Vetevendosje’s Haskuka said that after four years, the minimum wage would be set at 240 euros, to which Kaltrina Berisha from the Bosniak Democratic Action Party responded, “in the first year it should be increased to 250. It’s absurd for the minimum wage to be 210 euros–that’s not even 10 euros a day.”

The debate closed with the topic of Kosovo Liberation Army veterans lists, with moderator Jeta Xharra asking participants if they plan to verify the lists.

Balic said that they absolutely must be verified. Vetevendosje’s Misrad Shkreta mirrored his remark.

“We should differentiate between those who participated actively, and those who helped. We want to clean up the lists,” Shkreta said.

AKR candidate Reshitaj said: “It’s shameful what happened with [the KLA veterans list]. Names were put on those lists dishonestly, just to get paid. We need to form a professional team to review these lists.”

“My first job as a minister was to check the list of veterans. The list reached 46,000. But my success was that after 16 years, the pension payments for veterans began. We will clean the list – that must happen – but it will be done through representatives of the veterans themselves,” promised Abrashi.