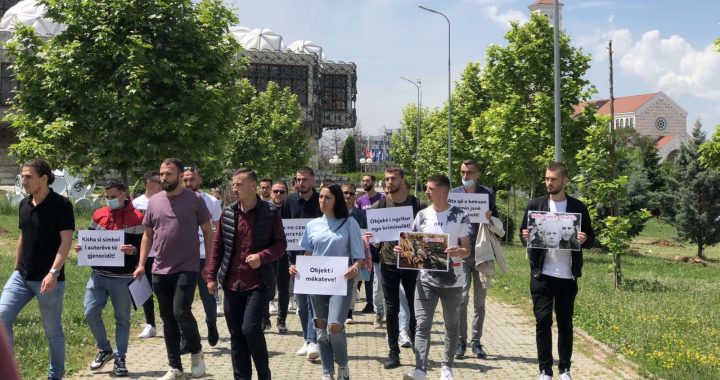 Students in Prishtina have staged protests after the Serbian Orthodox Church held a liturgy in an unfinished church on the university campus, whose ownership is hotly disputed and the subject of court proceedings.

On Friday, a group of students from the University of Prishtina protested in front of the unfinished church on their campus, one day after the Serbian Orthodox Church held a liturgy on the site, which has been a source of controversy since its construction began in the 1990s.

Erblin Hoxha, from the Students’ Parliament called on Kosovo institutions to respond to what he called “provocations inside the University campus.”

“We call on institutions to remove this premise from the campus or turn it to a museum ,which would display the violence and genocide against the Kosovo population,” Hoxha said.

On Thursday, the Serbian Orthodox Church posted  pictures on Twitter of priests holding a liturgy in the church.

The unfinished church, whose construction began in the mid-1990s, when Slobodan Milosevic was attempting to consolidate Serbian control over what was then the Serbian province of Kosovo, has been subject of heated debates in Kosovo for the last two decades.

In September 2017, the Appeals Court granted the Serbian Orthodox Church rights to the land, which was once part of the University of Prishtina campus, rejecting an appeal submitted by the university.

The University of Prishtina has been disputing the Church’s ownership of approximately four hectares of land and the legal basis for the building due to its ties to Milosevic’s brutally oppressive regime. The university initiated proceedings in 2012, but the case was thrown out in 2015 when university representatives failed to show up to the main hearing. The case was sent to the Appeals Court in March 2016.

The university claimed that protests in front of the church prevented representatives from attending the Basic Court session, but the Appeals Court decided that this reasoning was unfounded. After the decision, the University initiated a new case from the beginning which is still under proceedings. The Municipality of Prishtina has also disputed the Serbian Church’s ownership of the land.

In September 2016, the church was set on fire by unknown attackers, prompting members of the Serbian Orthodox Church and community to hold a clean-up and start refurbishment work. The Municipality of Prishtina halted work on the site, saying that the Orthodox Church did not have a permit to refurbish the building.

On Monday, the University of Prishtina issued a statement expressing “deep concern” about the church service, calling the church “an illegally constructed premise by the former Serbian regime at the University campus.”

“The University of Prishtina will undertake all necessary legal actions to release the campus from all illegally constructed premises, including the premise where the ceremony was held,” it said.

One day after the liturgy, a piece of graffiti reading “Jesus Hates Serbs” was written on the entrance of the church. The graffiti was erased after it went viral on social media with the Director of the Serbian government’s office for Kosovo, Petar Petkovic, saying that “to the messages of peace, the answer is graffiti of hatred.”

“Barriers and prohibitions are the answer to the building’s coexistence. Police, protests and threats of demolition are the answer to celebration and prayer. Is there a true reconciliation and future with such anti-civilization actions from Pristina?!” he wrote on Twitter.

The erased graffiti was replaced by another one on Friday reading: “Symbol of chauvinism becomes sanctuary. Blessed by [Kosovo PM] Albin Kurti”, after activists of the Social Democratic Party staged a protest in front of the church blaming Prime Minister Kurti for allowing the liturgy to be held. 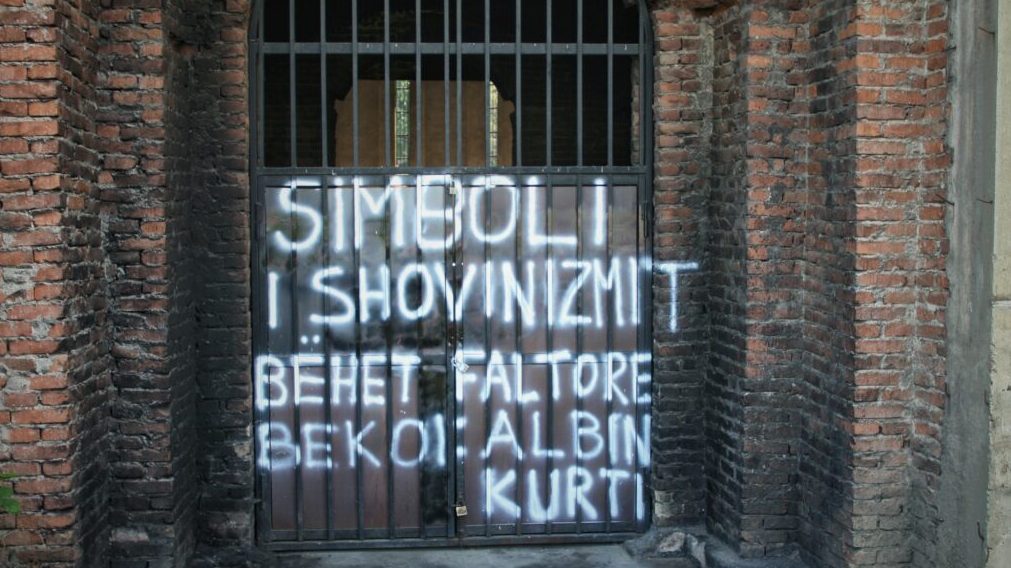 On Monday evening, Kosovo’s Minister of Culture Hajrulla Çeku called on all sides to “refrain from expressing pressure on justice institutions,” while the case is still under court proceedings.

“The property where the unfinished structure is currently under a contested procedure [in the court] and University of Prishtina is the plaintiff on this case. For this reason, no side which is part of the procedure should dare to put pressure on the courts,” Çeku said.

He added that “freedom of religion is guaranteed by constitution and laws… but cannot be used for political aims or to violate law, order and justice”.