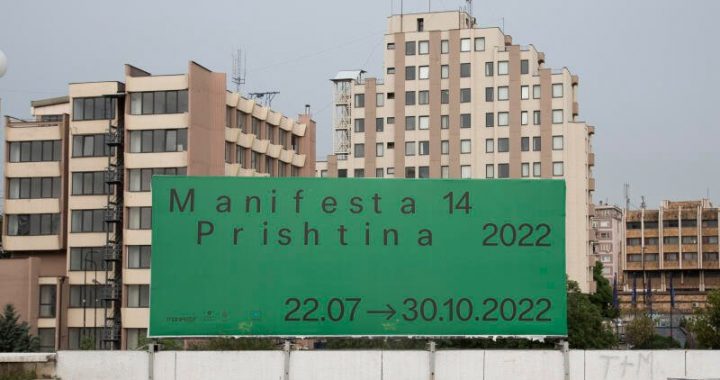 The 14th European pan-regional contemporary culture festival comes to Kosovo with a programme of art, performances, events and workshops – with the goal of empowering citizens to reclaim public spaces.

Between July and October 2022, Prishtina will host the 14th Manifesta – European Nomadic Biennial.

Manifesta 14 Prishtina will feature 103 participants from over 30 countries and takes place in 25 venues across Prishtina,, chosen in correspondence with CRA-Carlo Ratti Associati, one of the creative mediators of Manifesta 14.

The spaces where interventions will be made during the 100 days of the Manifesta include iconic monuments and buildings in the city, but also some areas “forgotten” by the authorities.

They include: Zahir Pajaziti Square, Kino Armata, the former Brick Factory, a new “Green Corridor” cycling path, the National Library of Kosovo, the Grand Hotel, “Germia” department store, the Monument of Communism, the National Museum of Kosovo, the Great Hamam, the Ethnological Museum, the Palace of Youth and Sports, the Rilindja building, the Observatory, Hertica School House and the Partisan Martyrs’ Cemetery Monument.

Interventions in some of the above mentioned locations have already started.

Part of Manifesta’s program is the “Key swap” Initiative.

Under the motto, “Meet a local/visitor at the locksmith and exchange a copy of your house key.  Share your contact details. Keep the key with you,” Manifesta’s Luz Broto proposes a special meeting between the people of Kosovo and the people who will visit the country during the biennial. Locals and visitors are called to exchange a copy of their house key. The key will be a souvenir that you will always carry with you.

Hedwig Fijen, founder and director of the festival, on Thursday said this edition is taking place at a difficult geopolitical moment for Europe, also with the Covid-19 situation.

According to her, this is the first time the biennial has come to the Western Balkans. Through it, it will aim to revitalize public spaces.

Mayor of Pristina Perparim Rama said the biennial would bring art to the citizens. He called on the international media to write more about Prishtina, calling it a city in transformation.

Kosovo’s Minister of Culture, Youth and Sports, Hajrulla Çeku, said that from what he has seen so far, this will be a wonderful event.

Çeku said that participants and citizens will have the opportunity to enjoy world art over these 100 days.

The panelists also called for the visa regime with the EU to be removed for Kosovo, as it prevents many local citizens and artists from visiting and showing their talent throughout Europe.

Manifesta was founded in 1994. It aims to rethink relations between culture and society, investigating and catalyzing positive social change in Europe.

Since 1996, it has been organized every two years in one city in different countries.  So far, 13 editions of this biennial have been held.