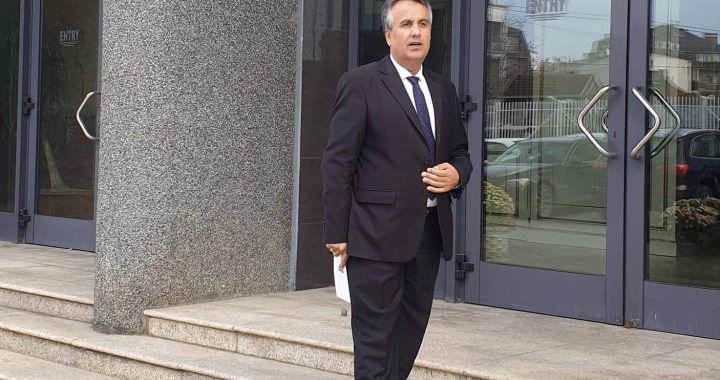 Several weeks after an arrest warrant was issued against him, MP Etem Arifi surrendered to the Prishtina Detention Centre on Tuesday, potentially leaving the Hoti Government without a majority in the Kosovo Assembly until December.

Isuf Iberdemaj, the Director of the Prishtina Detention Centre, has confirmed for BIRN that Etem Arifi, an MP from the Ashkali Party for Integration, handed himself in to the Centre on Tuesday morning.

Arifi, who was convicted of fraud in 2018, was due to begin serving his sentence on March 9, but twice successfully requested to have the sentence postponed on grounds of ill health. An arrest warrant was issued for Arifi on August 4 after a third request for the sentence to be delayed was rejected.

Iberdemaj told BIRN that Arifi will remain at the Centre for between one week and one month while a decision is taken over where his sentence will be served.

Despite his conviction, Arifi has continued to serve as an MP at the Kosovo Assembly this year. His last appearance at the parliament was on June 3, when he voted for the formation of Kosovo’s current government led by Avdullah Hoti, a motion which passed by a single vote.

On June 11, Vetevendosje submitted a case questioning the constitutionality of Arifi’s vote for the Hoti Government to the Constitutional Court, which is yet to reach a decision. Vetevendosje’s argument is based on Article 70 of the Constitution, which states that a deputy’s mandate comes to an end or is invalid after being “convicted and sentenced to one or more years imprisonment by a final court decision.”

For Vetevendosje MP Artan Abrashi, it is clear that Arifi automatically lost his mandate following the final decision on his case in January. “We believe that the decision of the Constitutional Court will reveal that this government has been functioning illegitimately,” Abrashi told Prishtina Insight.

However, according to Eugen Cakolli, a researcher at the Kosovo Democratic Institute who monitors the Kosovo Assembly, the fact that the final decision against Arifi was delivered during the previous legislature may mean that Arifi remains an MP until December, when his mandate will only be terminated due to being absent from the Assembly for six months.

“Since the beginning of the Hoti Government, Arifi has not participated in the sessions of the Assembly, making it very difficult for the government to pass even draft laws,” Cakolli told Prishtina Insight.

Cakolli believes that Arifi should resign and be replaced as an MP by another representative but is unlikely to relinquish his parliamentary privileges. “For moral reasons, at least, Arifi should have resigned the moment the arrest warrant was issued,” Cakolli said. “However, it has become a common practice that politicians do not give up their privileges.”

Prishtina Insight contacted Xhavit Beqiri, a senior advisor to Prime Minister Avdullah Hoti to ask how Arifi’s imprisonment will impact the work of the government. Beqiri stated that “the government will continue its agenda and it remains to be seen what happens.”