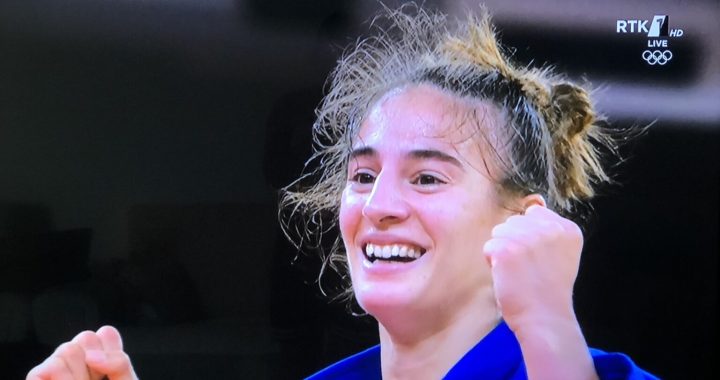 Peja judoka Nora Gjakova has won the gold medal in the women’s lightweight division at the Tokyo 2020 Olympic Games in Japan following Distria Krasniqi’s gold in the extra-lightweight competition on Saturday.

On Monday, Nora Gjakova became the third judoka from Kosovo to win an Olympic medal, picking up gold in the women’s under-57 kg judo competition in Tokyo after beating Sarah Leonie Cysique of France in the final.

En route to the final, Gjakova defeated Sanne Verhagen of the Netherlands in the round of 16 and Slovenian Kaja Kajzer in the quarter final, before meeting Japanese number 2 seed and former world champion Tsukasa Yoshida in the semi final. Gjakova had lost all five of her previous bouts with Yoshida, but pinned her opponent to the mat to win by waza-ari during golden score.

Third seed Gjakova’s Olympic gold is Kosovo’s second of the Tokyo 2020 games after Distria Krasniqi’s triumph in the under-48 kg category on Saturday. It is Kosovo’s third Olympic medal in total since it started competing at the Olympic Games in 2016, following the International Olympic Committee’s decision to recognise the Kosovo Olympic Committee in 2014.

Kosovo’s other Olympic medal was Majlinda Kelmendi’s triumphant gold in the half-lightweight division at Rio 2016. Kelmendi defended her title on Sunday, but was eliminated in the first round.

Kosovo has one more chance to win another Olympic medal in the judo hall on Thursday when Loriana Kuka will compete in the women’s half-heavyweight competition. Kosovo’s five Olympic judokas are all from the Ippon judo club in Peja, established by Driton Kuka, who is the trainer of all five fighters.

Outside of the judo hall, boxer Donjeta Sadiku will enter the women’s lightweight competition on Tuesday, facing Caroline Dubois of Great Britain in the round of 32. On Thursday, Olt Kondirolli will compete in the heats of the 100m freestyle competition in the swimming, while Musa Hajdari will enter the first round of the men’s 800m on Saturday.

However, perhaps Kosovo’s best chance of a fourth medal will come in the men’s under-125 kg men’s freestyle wrestling competition, where Egzon Shala, who came 5th in the 2019 World Championships, will compete on August 5.