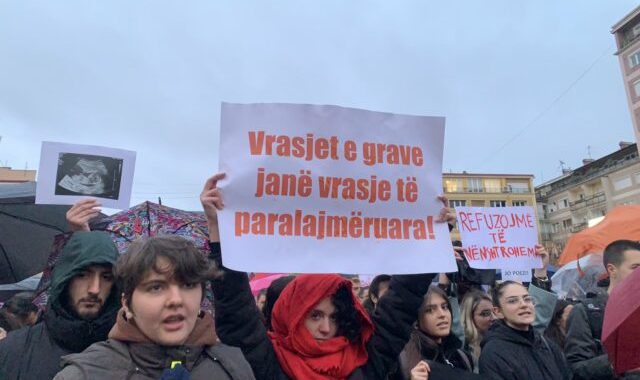 Many citizens joined Thursday’s protest in Prishtina over the shocking murder of a pregnant woman outside a hospital.

The murder of a 35-year-old pregnant woman, Hamide Magashi on Wednesday, suspectedly by her husband, right outside a hospital, prompted many citizens to gather for a protest, calling for action against femicide in Kosovo.

The protest held under the slogan, “The killing of women by men should be treated as a national emergency”, was held in the city’s Zahir Pajaziti square on Thursday evening.

Protesters carried other slogans, including “Prime Minister, the enemy is the patriarchy”, “A woman’s life is valuable, regardless of whether she is a mother, sister, daughter”, “Safety for women in public and private spaces”, and “Men kill women, the state is silent”.

Calling for justice for all the women killed in recent years, protesters placed slogans at the Ministry of Justice demanding that the killing of women by men be treated as a national emergency.

The protest was organized by the Collective for Feminist Thought and Action and Youth Initiative for Human Rights, YIHR.

Activist Neri Ferizi was arrested during the protest.

In response, the Collective for Feminist Thought and Action called on the Interior Minister, Xelal Sveçla, to release her.

“Tonight, the Kosovo Police arrested Neri Ferizi, one of the activists of today’s protest against the killing of women, and sent her to custody. We ask the Minister of Internal Affairs, Xelal Sveçla, to commit to the immediate release of our friend,” they responsed.

Kosovo police said that the activist was suspected of “causing a general danger” after a Molotov cocktail was thrown at the government building, causing a fire. The prosecutor ordered her to be taken into custody.

In Zahir Pajaziti Square, an exhibition called “The Last Tunnel” has also been gone on display, where the names of women killed in recent years in Kosovo are displayed.

The woman murdered on Wednesday was suspected to have been shot three times; police identified three bullet casings at the crime scene.

She was known to the authorities in August an indictment of her husband for intimidation was filed at Ferizaj court.

The same court filed a protection order against him. The order, which prohibited him from getting close to the now victim, was in force at the time of the murder.

This was the second femicide in Kosovo within a week. A 70-year-old man murdered his 63-year-old wife, an elementary school teacher, in Prishtina on November 25.