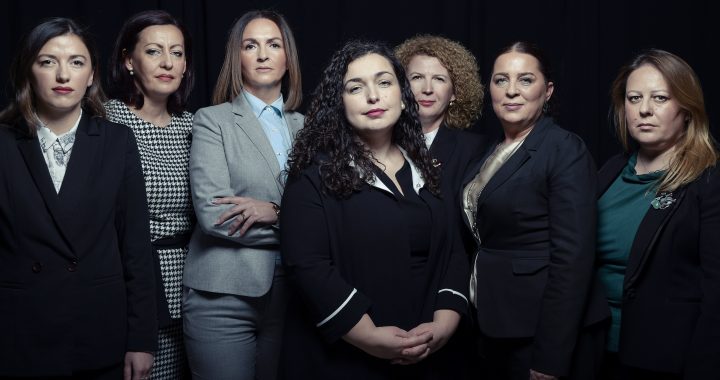 Leading feminists have praised the appointment of women to a number of senior positions in Kosovo’s new political institutions but argue that true equality is still yet to be reached.

For the first time since the war, seven senior positions in Kosovo’s governing institutions will be filled by women. Of the 15 new government ministries created on Monday, five of the most high profile will be led by a woman.

In the previous government only three women led ministries, despite the fact that the number of ministries peaked at 21.

Head of the Kosovo Women’s Network advocacy group, Igballe Rogova, told BIRN that she sees the number of women taking senior positions as a positive step.

“These appointments will very much empower the role of women in Kosovo,” says Rogova, adding that she expects the appointments of deputy-ministers to reflect this trend of increasing the number of women involved in the government. More than 30 deputy ministers are expected to be appointed by the new government.

Luljeta Demolli, executive director of the Kosovar Center for Gender Studies echoes Rogova’s sentiments, describing the new composition of the government as “inspirational.”

“Every qualitative increase of women in governance is a really positive development,” she tells BIRN. “It is a great motivation for girls and women seeking to be involved in political decision-making.”

Sociologist Eli Gashi also hails the increased visibility of women in the government, but argues that the aim should still be equal representation. “It’s clear there are positive developments in comparison with the previous government but we are still not where we need to be,” she says. “Although this is not an issue of only numbers, the objective should be 50-50.”

Outside of numbers, Gashi believes that the mindset among men and women representatives need to be more sensitive towards gender issues in order to bring about equality. “Our wider goal should be a government where women and men govern with high gender sensitivity, installing equality between women and men as a criterion, anytime they make a decision or manage [Kosovo’s] financial resources.”

For Demolli, the new ministers are highly qualified and will not only serve as “a facade’’ for the government, noting that women now have the power to demand more equality in governance. “It is important that the Speaker invites the Prime Minister of Kosovo to report on women’s issues,” she says. “It is also important to have a Code of Ethics where hateful language, insults and sexism are eliminated from the Kosovo Assembly.”

A gender quota in place in Kosovo ensures representation of 30 per cent for women on electoral lists for individual parties as well as within the Kosovo Assembly. Currently there are set to be 38 women MPs – two more than the quota ensured minimum of 36 – in the upcoming Kosovo Assembly, though this may change with the employment of deputy ministers.

Many of the women elected to the Kosovo Assembly at last year’s parliamentary elections did so without being assisted by the quota. However, another provision in Kosovo’s electoral law that requires an elected MP that is appointed to a government position to be replaced by a new candidate of the same gender, has prevented further women entering the Assembly this year.

Vetevendosje’s Tinka Kurti, despite receiving more votes at the parliamentary elections than both Emin Rrahmani and Fitim Haziri, did not become an MP, as more men were replaced than women.

For Gashi, tackling the barriers that women face entering politics should begin at a very young age. “Overcoming this demands change of mindset, and it starts with the way we educate our children in families and what we teach them at school, continuing up to how our police react when something is reported or the content of a judge’s ruling,” she says.

Although the number of women in key positions in central institutions is growing, there is currently no single woman serving as mayor in any of Kosovo’s 38 municipalities.

The unemployment rate among women in Kosovo is higher than that of men. According to a 2019 study from the Institute of Advanced Studies, GAP, the level of unemployment among women is 32.7 percent compared to 22.8 per cent among men.