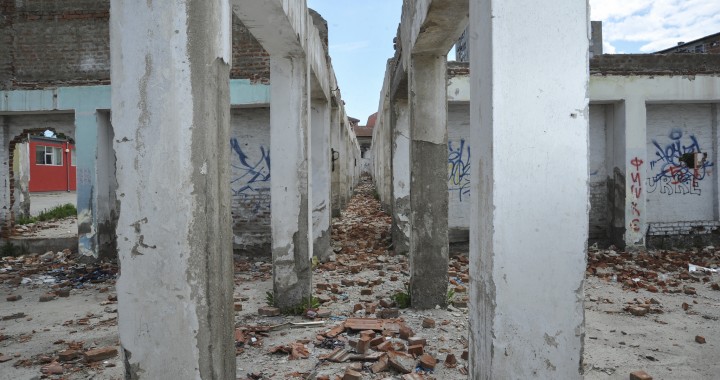 Human Rights Watch called on the UN to provide for Roma they resettled on land contaminated by lead refuse following the Kosovo war.

New York, NY — The global human rights accountability organization is once again calling for the United Nations to apologize and provide financial compensation to members of Mitrovica’s displaced Roma, Ashkali and Egyptian communities that were placed by the UN in camps that were contaminated by lead.

Several camps, intended to be a temporary solution, were set up very close to the slag heaps of refuse from Mitrovica’s Trepca mines, which were known to be contaminated when some 600 people were resettled there. A report by the World Health Organization in 2004 concluded that the families should be “evacuated immediately,” but the camps were not fully closed until 2013. For those affected, the long-term health effects persist.

In 2016, an independent human rights panel set up by the UN recommended that the body should apologize and provide individual compensation to the families who remain affected by lead poisoning. They slammed the process of trying to hold the UN accountable for human rights violations as “total failure,” a “human rights minstrel show,” and a “sham.”

Following the panel’s conclusion, former UN Secretary General Ban Ki-moon directed his staff to prepare a draft apology, but the policy was reversed by the current Secretary General Antonio Guterres, on the urging of the Office of Legal Affairs, according to the New York Times.

In May of this year, the Secretary General “expressed regret” and announced that the UN would seek voluntary contributions for a trust fund that would fund “community projects” for the affected Roma.

“The Secretary-General’s decision to establish a trust fund was taken after thorough and careful consideration of the findings of the Human Rights Advisory Panel,” a spokesperson for the UN’s Department of Peacekeeping Operations told PI in an e-mail.

“In order to provide meaningful redress to the victims, the Secretary-General has decided to establish the voluntary Trust Fund to raise about $5 million for community-based projects to more broadly and comprehensively help the Roma, Ashkali and Egyptian communities in Kosovo that were affected.”

At the HRW press conference, which took place at the UN headquarters in New York City, Rall noted that a similar trust fund was set up in 2016 for Haiti as a way to redress a cholera outbreak there that was believed to have started from UN peacekeepers who arrived after the 2010 earthquake. The cholera outbreak killed 9,000 Haitians and infected another 800,000. The UN hoped to populate the fund with $400 million, but one year later it has received only $2.7 million in voluntary contributions from member states.

“Creating an unfunded trust fund to compensate victims is like giving someone an empty bank account to rebuild their life,” Rall said. “Here, as in Haiti, it is the victims of UN negligence who are stuck with the bill and who have no access to justice or remedy.”

HRW campaigners welcome the UN’s efforts to set up projects that would benefit the community, but stressed the need for individual compensation.

“It is absolutely crucial that in these cases, that any money collected be used to benefit the people who were affected, with a special focus on health services and educational support,” said Lou Charbonneau, HRW’s UN Director.

Campaigners also emphasized that the UN should work with the government of Kosovo, which currently provides no special assistance to the affected families. Most of the Roma rely on meagre social assistance payments from Serbia, and those that PI has spoken to report that the Kosovo authorities have not made any attempts to measure the lead levels in their blood for years, if ever.

However, says Rall, the UN was the executive authority in Kosovo when the Roma were placed on land contaminated by lead, and how it adjudicates its own human rights violations has consequences for its global moral legitimacy.

“The UN should stop ignoring its own experts’ sound advice and compensate the people who are experiencing lifelong damage and hardship due to the UN’s shortcomings,” Rall said. “How can the UN expect to effectively press governments to take responsibility for their abuses if it won’t do the right thing for the harm it caused?”