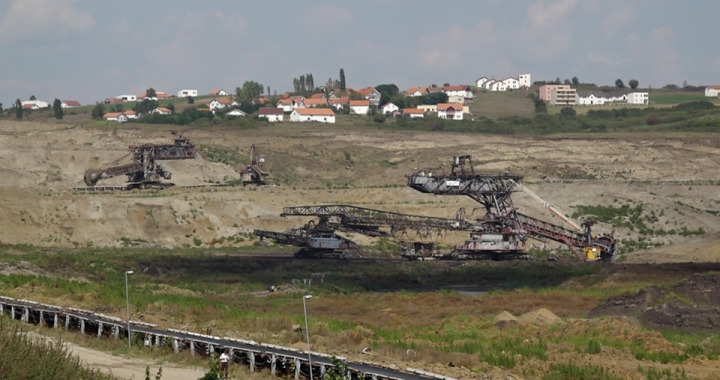 The Kosovo government will forcibly expropriate several properties in the Shipitulla village, facilitating the expansion of the Kosovo Energy Corporation’s coal mining operations.

The Kosovo government decided last week prepare to forcibly expropriate properties in the village of Shipitulla, on the frontlines of the Kosovo Energy Corporation, KEK, coal mining zone. The decision rejects the Resettlement Policy Framework, which was adapted from the World Bank’s rules and procedures around the resettlement, and requires residents’ cooperation and consent with institutional proposals for expropriation and compensation.

Without being able to achieve such an agreement, the government has decided to resettle inhabitants through the Law on Expropriation of Property, which outlines avenues for KEK, or the government as a shareholder of KEK, to forcibly resettle residents without their consent.

In late July, local and international media reported that Kosovo was on the verge of an energy crisis, with the country’s coal reserves down to just two weeks.

But the country was not running out of coal–it was, rather, inaccessible, beneath private properties around Obilic.

For ten years, residents of Hade, another Obilic-area village, have been waiting for expropriation in order to make space for coal extraction by KEK. Residents have protested for just resettlement and against demolitions and environmental degradation.

Recently, KEK has focused its mining efforts on expanding in the direction of the Shipitulla village, reported Kosovo 2.0.

More than 100 houses were allowed to be built in Shipitulla after the declaration of the latter as an “area of special economic interest.”

After the alarm was raised regarding the energy crisis, KEK reached an agreement with six owners from the 17 properties planned for evaluation and expropriation.

Now the government will take action to forcibly expropriate the remaining 11 properties affected by the project for expansion of the coal mining zone.

Steps for the expropriation of these properties began during the first five days of August, after KEK warned about the depletion of coal reserves.

Minister Ferat Shala claimed that the Ministry of Environmental and Spatial Planning held a public hearing on August 10th before making a preliminary decision on August 11th to pursue forced expropriation.

However, Shipitulla inhabitants insist that no such public hearing was held.

Ardian Mjeku, one of the owners of the properties that will be expropriated according to the government’s decision, said that the homeowners had not been informed about the decision, and insisted that there was not a public hearing held on the 10th.

“The public discussion has not been held. The Ministry of Finance, the Commission for Evaluation of Properties, has not entered our homes, but has made the evaluation from the roads close to the houses, and said that the living conditions are not adequate here,” said Mjeku.

Mjeku said that the inhabitants will not leave their homes, but will instead wait for government action, whatever that may be.

“We intend to stay here until they violently displace us, and if they remove us violently we have no place to go,” said Mjeku.

While KEK and the respective ministries had earlier talks with residents concerning expropriation, the lives of some families in Shipitulla have become difficult and even endangered.

On the evening of August 17th, KEK excavators mined towards Shipitulla, drastically intruding upon the security zone, 250 meters away from inhabited houses.

Fatmir Gerguri, chief inspector of mines of the Independent Commission for Mining and Minerals, KPMM, demanded that the inhabitants let the excavators work through the night while the KPMM worked to come to a speedy decision on whether the excavators can go past the security zone.

Although the KPMM called for excavators to respect the security zone, according to Mjeku, this decision has not been respected, and now the excavators have reached a distance of 50 meters from the homes, risking erosion of the land on which they are situated.

Inhabitants have the right to file complaints to the Ministry of Environment, but the decision to expropriate cannot be halted by citizen complaints.

Apart from the 11 properties planned for forced expropriation, Minister Ferhat Shala also plans to apply the same strategy to the remaining cadastral zone of Shipitulla.

At a meeting on August 30th, the government in charge approved a proposal to conduct a property assessment for expropriation of the remaining properties in Shipitulla.

The inhabitants of these properties share the same opinion as their neighbours on this issue.

Saim Krasniqi, an owner of several properties in the area, is angry with the government’s decision but said that it was to be expected.

“The Kosovo government has taken the wrong decision a hundred times, always in favour of KEK. No one from the government or the ministries has taken the initiative to meet the inhabitants or regard us as an equal party to KEK,” he said.