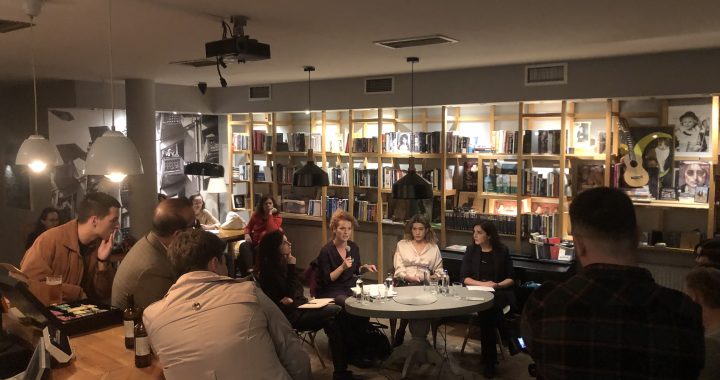 SLAPP lawsuits, used by financially powerful individuals, groups and politicians to allegedly silence, intimidate and threaten journalists, are seriously threatening the work of journalists of the Western Balkans and action is required, according to a panel discussion in Prishtina.

In recent years in the Western Balkans, journalists and activists faced SLAPP lawsuits which aimed at silencing criticism and opposition.

In a panel  discussion on Monday, representatives from Kosovo, Albania and Serbia discussed the need for documentation of these cases, greater support from state governments for activists and journalists, closer local, regional and international cooperation and raising solidarity.

Flutura Kusari, senior legal adviser at the European Center for Media Freedom, said SLAPP lawsuits are being used by financially powerful people and politicians to infringe on freedom of expression and intimidate journalists and activists.

Kusari emphasized that according to the data of the Anti-SLAPP Coalition in Europe, there are many cases where lawsuits have been filed against activists and with special emphasis on journalists, but these data do not include all of them, since many of them have not managed to tell publicly.

SLAPP lawsuits are lawsuits that seek to censor, intimidate, and silence critics by charging them with the cost of a legal defense until they abandon their cause.

According to Kusari, the best way to address this issue is to document SLAPP lawsuits.

Kusari says that SLAPP lawsuits are usually filed against journalists, not against the media company, in order to exhaust the journalist by running through the courts through litigation, and not leave them time to investigate.

“The journalist of Koha , Saranda Ramaj, has 10 lawsuits with damages worth about 1 million euros. Because they attack journalists individually and not the media company, so that instead of dealing with investigative stories, journalists have to deal with courts. That’s their goal,” she says.

Environmental activists Shpresa Loshaj and Adriatik Gacaferri were sued by the Austrian company KELKOS, after they raised their voice against the hydropower plants in the Deçan gorge, lawsuits which the company later withdrew.

“I don’t know that there is a step to address SLAPP lawsuits in Kosovo and Albania. We can talk to each other and agree with what we are saying, but this is the responsibility of the institutions, we can only help them,” she added.

Meanwhile, regarding the situation in Albania, Xheni Karaj from the LGBT Anti-Discrimination Alliance in Tirana, Albania, said that the lawsuit against journalists and activists has become a phenomenon during the last two years in Albania.

“You see that the PM and the ministers say that they support LGBT people, but they do not support them with actions. It is the same in Kosovo,” she said.

According to Karaj, it is very dangerous when the Government itself justifies violence and hatred but does not find a solution, highlighting the physical attacks on activists at EuroPride in Belgrade, Serbia.

“If they are populist in their country, they have the support of the people, but if they are open with foreigners and have their support, then they play like a ping-pong game with our cause, and this is not right. These are often used for populism and then on the other hand to look good to internationals,” she said.

Karaj expresses her concern that as long as people and institutions do not deal with this problem, it will be very difficult to solve it.

A similar situation is also described by the panelist from Serbia, Tara Petrovic from the Civic Initiative in Belgrade. She says SLAPP lawsuits are on the rise in Serbia against both journalists and activists.

She assesses the situation with SLAPP lawsuits in Serbia as an ‘epidemic’, specifying cases such as against activists or investigative media such as KRIK, which has about 10 SLAPP lawsuits due to their investigations into corruption.

Petrovic says there have been recent cases of SLAPP lawsuits by private companies against journalists.

According to her, through these lawsuits, companies use the judicial system as a weapon against critical voices.

“An activist from Novi Pazar has about 15 SLAPP lawsuits, some criminal and some civil, all of which are from the acting director of the Hospital in Novi Pazar. This is because during the pandemic in Novi Pazar there was a large number of deaths and the citizens were disappointed with how the health authorities managed the crisis,” sha said.

According to her, the acting director has filed a SLAPP lawsuit against every citizen who publicly objected, including doctors who signed the petition for his dismissal and a patient who posted on Facebook about his experience at the hospital.

Panelists demonstrated the need to connect initiatives and movements in the region and to foster regional solidarity and the exchange of interregional experiences to provide a safety net against corrupt institutions and officials.

Panel discussion, SLAPP lawsuits, intimidations, and threats: A slap in the face of engaged citizens?’ was organized by the European Fund for the Balkans, EFB, and the Institute for Democratic Engagement of Southeast Europe, IDESE, in the frames of their Engaged Democracy Initative, EDI.