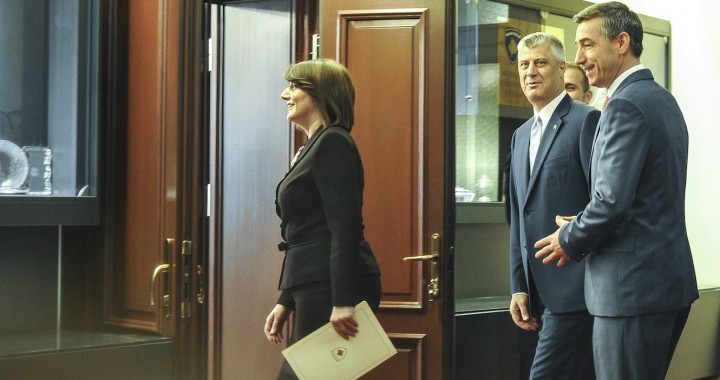 Hashim Thaci, the former leader of Kosovo Democratic Party (PDK) and president-elect, took the presidential oath today. In a special assembly meeting the President-elect took the oath in front of the Assembly, which is being boycotted by the three opposition parties Vetevendosje, Initiative for Kosovo NISMA, and Alliance for the Future of Kosovo (AAK).

After signing the oath, Thaci gave his first speech as Kosovo’s President.

“It is a special moment in my life, a moment of pride and responsibility,” he said. Thaci was elected president on February 26 during an extraordinary assembly session which was accompanied by tear gas and opposition protests.

“As President I will be a guarantor for the Constitution and the law, I will be a unifying political and civic factor, a representative of all citizens regardless of their ethnicity, religion, or gender,” said Kosovo’s new President. He then graciously thanked the departing president, Atifete Jahjaga who was present.

“I thank President Jahjaga for her extraordinary work,” said Thaci. After the short ceremony Thaci and Jahjaga held a handover meeting.

During the ceremony, opposition activists threw stones at the Assembly building breaking a window. Vetevendosje activists were responsible for the incident, the opposition party’s spokesperson Frasher Krasniqi confirmed. He called the attack “a symbolic action against [Thaci’s] election.”

The inauguration of the new President is scheduled for Friday, in Prishtina’s city centre.