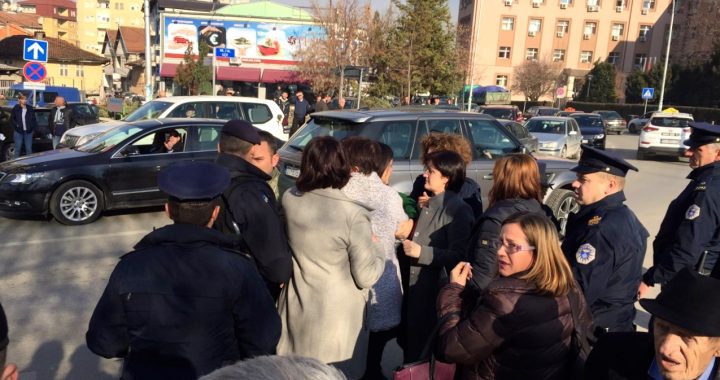 Vetevendosje MPs Albin Kurti, Albulena Haxhiu, and Donika Kadaj-Bujupi were arrested for failing to appear in court regarding accusations of releasing tear gas in the Kosovo Parliament.

Albin Kurti was arrested on Friday morning while on his way to a Kosovo Assembly session. Vetevendosje MPs attempted to block Kosovo Police from arresting Kurti, and in response, police released pepper spray.

Shortly after Kurti was arrested, two other opposition MPs were arrested in front of the Kosovo Assembly.

Albin Kurti, Albulena Haxhiu, and Donika Kadaj-Bujupi are accused of letting off tear gas in Parliament in 2015, and failed to show up for their trial on Wednesday, though Faton Topalli, a fourth accused MP, appeared in court.

Police went to Kurti and Kadaj-Bujupi’s homes after they failed to appear in court, but no one was there.

In April, an arrest warrant was issued to Kurti for failing to appear at an earlier court day, but it was suspended before the June general elections due to Kurti’s candidacy for Prime Minister.

“Three MPs were brutally arrested by the Police following political orders. They were on their way to participate in the Parliament session. This is a continuation of a massive and all-encompassing persecution of the Vetevendosje Movement,” he said.