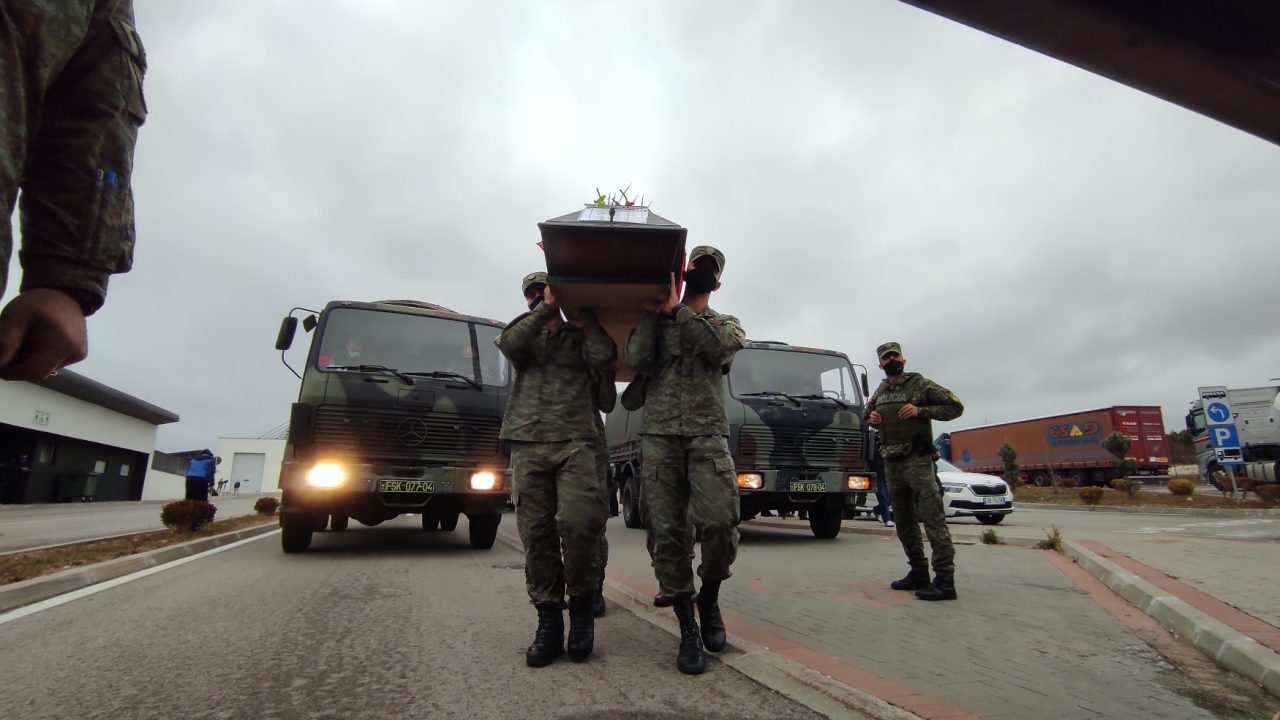 The handover of the remains of the Kosovo Albanian war victims on Thursday. Photo: Denis Sllovinja/BIRN.

The remains of ethnic Albanian civilians who were killed in the 1998-99 war and whose bodies were recently found in a clandestine mass grave in Serbia were handed over to the Kosovo authorities at a border crossing.

The remains of seven Kosovo Albanian war victims were handed over on Thursday to the Kosovo authorities at the Merdare border crossing, four months after they were exhumed from a mass grave in at an open-cast mine in southern Serbia.

Relatives of the victims, who were killed in a massacre in the Kosovo village of Rezalla in April 1999, watched the handover ceremony in tears as Kosovo’s Prime Minister Albin Kurti told them that “no one can understand the burden of the absence that time has added to the wounds of your soul”.

On April 5, 1999, Serbian forces entered Rezalla in the municipality of Skenderaj/Srbica and killed 98 ethnic Albanian civilians.

The day afterwards, the Serbs returned to take the bodies away, transporting many of them to mass graves near Raska in southern Serbia in an attempted cover-up operation.

Kurti alleged that the massacre was “one of the things that prove Serbia’s genocide in Kosovo”.

The mass grave where the victims’ remains were found, at the Kizevak mine, was discovered in November 2020 after aerial images indicated where the bodies might be buried.

The Kizevak mass grave is the fifth such site to be discovered in Serbia since the end of the Kosovo war 22 years ago. It is not far away from the Rudnica mine, where a mass grave was found in 2013 containing the remains of 52 Kosovo Albanians.

In 2014, the International Criminal Tribunal for the Former Yugoslavia in The Hague sentenced former senior Serbian police official Vlastimir Djordjevic to 18 years in prison in part for his role in concealing the bodies of ethnic Albanians who were killed in Kosovo.

Over 900 bodies have been found in mass graves in Serbia, but no Serbian court has ever convicted anyone of involvement in the cover-up.

Around 6,000 missing persons from the Kosovo war have already been found and identified, but there are still more than 1,600, mainly ethnic Albanians but also some Serbs, whose whereabouts remain unknown.

In a separate development, the Serbian Missing Persons Commission said earlier this week that the identified remains of Serbs who died during the conflict in Kosovo were handed over at the Merdare border crossing last Friday.

“The remains of the victims were received from the Pristina delegation on behalf of the families by representatives of the Belgrade delegation of the [Red Cross-chaired] Working Group for Missing Persons,” the commission said in press release.