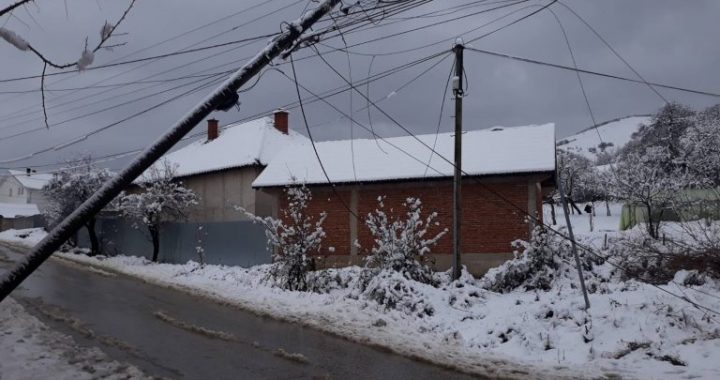 Bad weather on Wednesday night led to widespread damage to buildings across the country, with schools closing on Thursday and many citizens suffering electricity blackouts.

Strong winds accompanied by heavy rain and snow on Wednesday night have caused considerable damage across Kosovo, especially in western and central regions.

Houses, mosques and schools were damaged, with reports of an estimated 100,000 people suffering a blackout as electricity poles collapsed. Schools were closed across the country on Thursday, with the new government promising to aid citizens in affected areas.

In the Municipality of Drenas, the top of a minaret was destroyed following the storm, while numerous roofs were also damaged. In other villages in the region, including Kishnareka and Llapushnik, a number of electricity poles were knocked over or collapsed entirely.

According to the Kosovo Energy Distribution Company, 100,000 people lost electricity due to the strong winds, while a contingent of more than 500 people from the company were in the field on Wednesday night in an effort to fix the damages.

Prime Minister Albin Kurti has announced that he is planning to visit the western part of the country. “I will visit the Municipalities of Istog, Peja and Klina to see the situation up close and listen to the needs of both institutions and citizens,” Kurti wrote on his Facebook page.

In Istog and Peja, local institutions also have formed extraordinary committees to face the consequences and to conduct assessments of the damage caused by bad weather, alongside representatives from the Ministry of Agriculture.