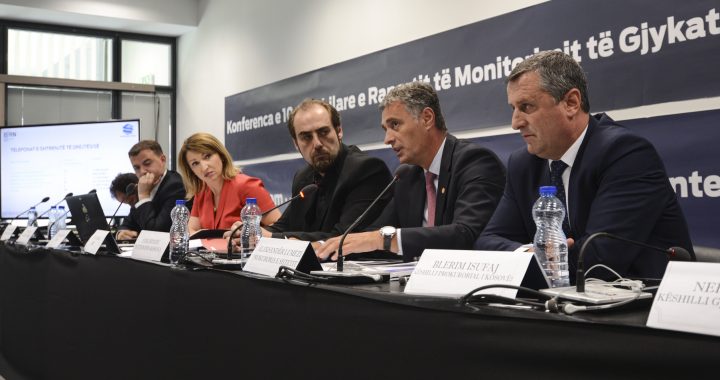 The report is a result of the monitoring of 600 court hearings across 26 courts in the country throughout last year, including basic courts, the Court of Appeal and the Supreme Court.

Faik Ispahiu, Executive Director of Internews Kosova, thanked the participants and court monitors who worked on the project.

“Over 50 monitors have worked on this project, some of whom are now prosecutors, judges, and lawyers,” said Ispahiu.

BIRN Kosovo Director Jeta Xharra said that monitoring the courts over the past ten years has been one of IKS and BIRN’s most important projects.

“We feel today that we have collaborated with you, the justice system employees, to achieve these results. We do not see each other as rivals after ten years,” Xharra said, adding that this year’s findings nevertheless indicate that there is room for courts to increase their transparency.

“We all need to be clear that the media and the judicial system are partners in the fight against organized crime and corruption. We are aware of the flaws, and only by accepting these flaws can we improve,” said Aleksander Lumezi, Kosovo’s Chief Prosecutor. “I hope that these findings will be beneficial to fixing the flaws the system has.”

Petrit Kryeziu, the author of the report, summarized the main findings.

“The main points of this report include the delays on filing criminal charges from the police and the prosecution, the failure to justify decisions for pre-detention–both from the prosecution and the judges–from prior procedures, and the strategy of detaining suspects while awaiting trial,” said Kryeziu.

The court monitors’ findings shed light onto procedural violations during 2016, such as violations of defendants’ right to be informed in their native languages, lack of court order during trials, and unnecessary postponements of court hearings.

The report concludes with BIRN and Internews Kosova’s recommendations, for example for the Kosovo Prosecutorial Council to more frequently refer appropriate cases to mediation, and for the Kosovo Judicial Council to apply bail as an alternative measure to pre-detention.