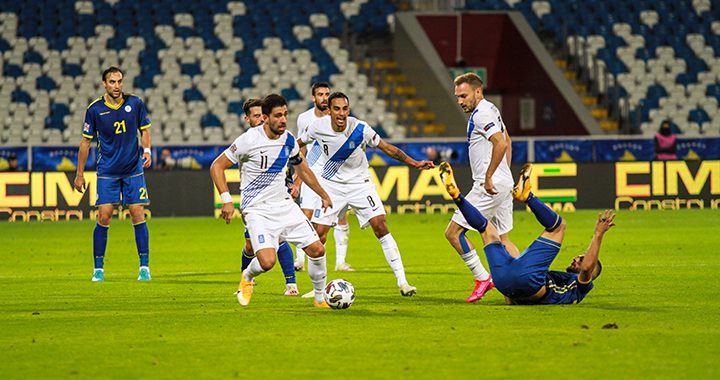 The Kosovo men’s team made a difficult return to international football, losing to Greece and drawing with Moldova in the UEFA Nations League, with the coronavirus crisis preventing many players from travelling.

Kosovo succumbed to a 1-2 defeat to Greece on Sunday night in a mostly empty Fadil Vokrri stadium in Prishtina.

The game was played without supporters present due to ongoing restrictions to prevent the spread of the coronavirus. However, Kosovo’s Dardanet fan group worked hard to make their presence felt, projecting messages of support onto the outside of the interior ministry behind the stadium.

A pre-recorded version of the team’s unofficial anthem Besa Bese rang out at the beginning of the game, while the typical commemoration of Fadil Vokrri in the ninth minute of the match was also honoured, with pre-recorded applause played from outside the stadium.

It was the men’s team’s first appearance in Kosovo this year after the global COVID-19 pandemic wrought havoc with the football calendar, while Kosovo’s own crisis with the disease continued to cause disruption.

Eight of the players called up to the squad were prohibited by their club sides to travel to Prishtina due to quarantining rules in effect on return from Kosovo, including four players that started Thursday’s 1-1 draw with Moldova.

Kosovo’s remaining players put in a tired and disjointed performance for the first three quarters of the match, with the Greek goal rarely looking threatened after the visitors scored in just the second minute before adding a second goal five minutes into the second half.

However, the introduction of Bernard Berisha as a substitute added some much needed energy to the home side’s performance. Berisha was completely deserving of his superbly taken 81st minute goal, which set up a tense final 10 minutes in which Kosovo almost snatched an unlikely draw.

The defeat to Greece followed a frustrating draw with Moldova in Parma on Thursday, where Kosovo couldn’t convert their dominance of possession into a victory. After the opening two games of Group C3 in the 2020 UEFA Nations League, Kosovo sit third in the group, three points behind both Greece and Slovenia and level with Moldova on one point.

Attention now turns to a play off with North Macedonia in Skopje in October, where victory would put Kosovo a single game away from the next European Championship. Speaking to RTK after the game, captain Valon Berisha assured fans that he had no concerns over next month’s play off, insisting that the players were still finding their form.

Speaking at a press conference after the game, Kosovo coach Bernard Challandes spoke of his disappointment with the performance, describing both the goals conceded as “unnecessary.”

Challandes also lamented the difficulties caused by so many absences due to the COVID-19 situation in Kosovo, and admitted it didn’t provide the best preparation for the match with North Macedonia, adding that he hoped he didn’t face the same situation in October.