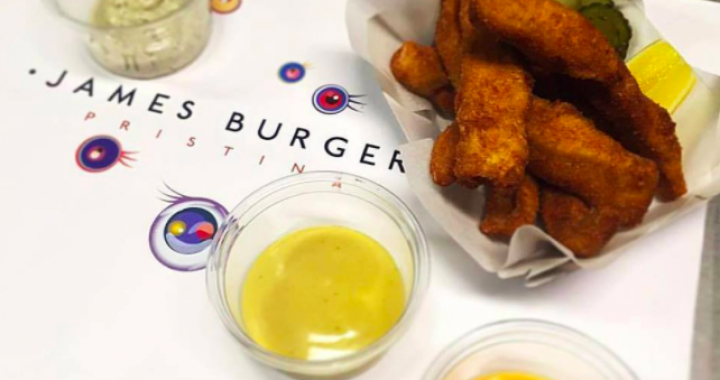 Whether you’re in for vegetarian dishes, ‘concept’ fast food, or lunchtime classics, there’s a burgeoning Prishtina street corner that’s got you covered.

Directly across from Prishtina’s Hotel Grand, four great lunch places all within a stone’s throw of one another sit on the narrow Johan V. Hahn side street. The street, named after the Austrian diplomat and Albanian historian, linguist, and a father of Albanian studies, is not itself anything special. Surrounded by concrete, the sidewalks are choked with parked cars. Soft sounds from the Music department of the Faculty of Arts mingle with the beeping horns of impatient drivers. Still, with plenty of options for plant based bowls and cold salads, it’s becoming my most frequented area to grab lunch.

Group texts between Prishtinali circles went out in haste once word of Babaghanoush’s new lunch hours got out.

This favorite spot for Mediterranean and Middle Eastern inspired mezze and falafel is one of the only vegetarian restaurants in town. The unmarked restaurant tucked back from the street used to open only after 5:00 pm. Countless summer nights have been spent on the patio, enjoying Macedonian wine and mezze platters for two, maybe six. Plenty of winter dinners have taken place in the intimate, cramped, and charming dining space. It’s the first place on my mind for a casual dinner date or somewhere to take guests.

Now that Babaghanoush is open daily for lunch starting at 11:00, it’s also a great option for nine-to-fivers catching their breaks. Better yet, the new hours come with a new, expanded lunch-specific menu heavy on dishes akin to the grain bowls taking over food blogs and hot LA lunch spots.

Some old favorites are on the lunch menu: a falafel wrap or a bowl of red lentil soup is always a good choice. The soup is spicy and filling, and such a comfort alongside fresh bread basted in salt and herbs.

My new favorite is the falafel bowl, a large plate that could be split between two. It’s heavy on the vegetables, and the tanginess of marinated red peppers and garlic yogurt is so satisfying. The bowl of goodness is a nice choice for its lentil and bulgur salad component, though I prefer this warm bowl without the fresh cucumber. The brand new Buddha bowl and Buddha burger shows that Babaghanoush has really perfected their vegetarian lentil patty.

James Burger’s December premier was hyped due to its minimal, glossy design and the the chef’s background in Michelin restaurants.

This month, James expanded the menu from opening week, which consisted only of a chicken sandwich and a burger as mains. Now on offer are truffle burgers topped with fried eggs, beet based veggie burgers, chicken fingers and a fried chicken ‘tost,’ and a slew of new dipping sauces.

The new veggie burger is earthy, sweet, and wholesome. The patty, consisting of beets, lentils, navy beans, and sweet potato, is a brilliant bright pink. The burger is definitely celebrating the vegetable profile and is not attempting to mock the charred, greasy, savory taste of a beef burger. I enjoyed it and felt good after eating it. But I would have preferred the patty to be cooked longer–maybe even a little blackened and crispy–because its softness mixed with the wet toppings didn’t allow the bun to hold up.

The classics: Papirun and Metro cafe

Sometimes all I want for lunch is a good cold salad and bread. Something fresh, maybe a protein, some seasonings, all held together by a creamy component–it’s a foolproof formula, dating back at least to 1860s Russia. And although I’m super excited by the playful deviation from typical Prishtina lunch fare that Babaghanoush and James Burger are offering, I’m glad there are two places nearby serving up classics.

Metro Cafe has been around for years, and its menu has remained consistent (perhaps even to a fault): every day you can expect basically the same salad platter and sandwich options. Most people go for a salad with their choice of protein, with options including classic egg salad, curry chicken salad, and Mexican tuna salad. I usually go for the curry chicken. The salad is plated with fresh greens, roasted eggplant and zucchini, a tomato based pasta salad, and toasted whole-wheat bread.

Right behind Metro, Papirun has been a Prishtina go-to from the time it was a cramped lunch counter to its relocated, reloaded new space. Many enjoy the thick, juicy burger, but like I said, I’m in it for the mayo-based salads.

The menu has several great options, but I go for the tuna or cold chicken, which are served alongside cold pasta and fresh greens and comes with a basket of toasted breadsticks. It’s huge, and usually comes swimming in their honey mustard dressing, which is tasty, but can overpower the dish. Ask for it on the side.