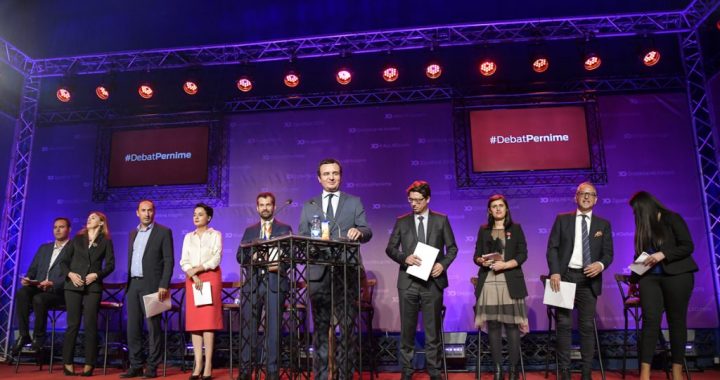 As part of a series of debates with prime ministerial candidates on BIRN’s televised program Jeta ne Kosove, Vetevendosje’s Albin Kurti and his team of candidates vying for seats in the Kosovo assembly discussed their policy plans and promises for the next administration.

On Thursday night, Vetevendosje’s candidate for prime minister in the October 6 elections, Albin Kurti, along with a team of ten MPs running from his party, revealed the party’s top priorities and solutions for the next governmental administration.

Appearing on BIRN’s televised program Jeta ne Kosove, Kurti and his colleagues responded to questions about how Vetevendosje plans to improve the country across the five main sectors: economic development, education, health and social issues and rule of law.

In his opening remarks, Kurti said that his government’s plan is to reduce the number of ministries in the government. “Imagine, if I add two more people [pointing a finger to his team of ten], that’s basically my government, and I’m seeking to have only 12 ministries.” Kosovo’s outgoing government is comprised of 21 ministries with more than 80 deputy ministers.

The anchor of the debate, Jeta Xharra, introduced 24 experts from different fields to participate in the debate and challenge Kurti and his team on their plans if they were elected to form the government.

Kurti said that out of 17 public enterprises, only three are generating profit and the rest are causing losses to the state budget, noting corruption as one of the biggest reasons. Fighting nepotism and halting further privatization is the plan, said Vetevendosje’s leader, who additionally promised to shut down the Kosovo Privatization Agency, KPA.

Kurti also promised to establish a Bank of Development to help local businesses, criticizing the high interest rate offered by existing commercial banks, which currently stands between six and eight per cent. “With the Bank of Development we aim to have interest rates at less than three per cent,” he said, adding that small and medium-sized businesses would benefit the most from such a bank.

Kurti said that he intends to revive the public’s trust in the state by improving Kosovo’s rule of law, and that his administration would not be marred by the scandals that characterized the previous government.

To achieve this, said Kurti, his government would establish a Commercial Court that would primarily deal with cases related to the economy. The creation of this court would decrease the more than 200,000-strong backlog of administrative, civil and economic cases that the judiciary are struggling to process. This backlog has caused more than four billion euros to be locked into legal battles that cannot be accessed by people in Kosovo, and a more efficient judicial process could release that money and contribute to Kosovo’s economic development.

Asked by one panelist how Kurti’s government would collect taxes, which has long been a struggle for previous governments, Kurti said that when his cabinet takes charge, political scandals will halt immediately and that this will increase taxpayers’ trust in the state, which would encourage citizens to pay their contributions.

Arben Vitija, one of Kurti’s team standing for a seat in the Assembly for Vetevendosje in October’s elections, who was previously head of the health directorate at the Municipality of Prishtina, said that increasing transparency is crucial to improve “the poor” healthcare system.

Vitija said that the Vetevendosje government’s top priority is establishing a sustainable health insurance system. However, Vitija explained that a proper health insurance system would not be functional until 2023, as it would require long term commitment to the transformation of Kosovo’s public health sector. In addition, the functionalization of a database for electronic medical records is another priority.

Vitija promised a 10 per cent increase in the wages of health sector employees during their first mandate, and that across the next four years, the budget for the health sector would increase to 40 million euros. Vitija continued by promising that all essential medicines would be available for Kosovar patients within the first year of Vetevedosje’s administration. However, without strict and transparent management, he said, it would be futile to invest millions in the health system.

When asked for his position on the environment, Vetevendosje’s leader promised to commit 40 million euros to developing an efficient energy sector in Kosovo.

However, Vetevendosje’s plans do not include scrapping Kosovo’s controversial and environmentally damaging coal-fired power plants. Kurti promised to invest in revitalizing the old power plants and reducing pollution, explaining that he sees no other alternative. “I believe it is an imposed solution, it is not our choice. There is no way to replace the energy deficit through efficient energy supplies and this is what our experts say.”

While planning to maintain Kosovo’s existing power plants, Vetevendosje promised to withdraw from the contract the outgoing government concluded with ContourGlobal to construct a new coal-fired power plant, Kosova e Re.

Although Kurti did not explicitly state by how much his party plans to decrease the price of electricity, this is among the 20 priorities that Vetevendosje published at the outset of the electoral campaign.

Liburn Aliu, a former MP, promised that damage to Kosovo’s forests and rivers will end, and this is a priority for his party. According to him, illegal construction in national parks would be “absolutely out of the question” under Vetevendosje’s rule.

The debate continued with questions from representatives of Kosovo’s Bosniak, Ashkali and Serb communities, especially on whether or not the needs of these communities would be represented adequately by his government.

Kurti said that it is important to acknowledge the discrimination of Roma, Ashkali and Egyptian communities in Kosovo. Kurti insisted that as a society, we should aim for equality and that discrimination would end with his administration. To achieve this, he plans to improve education and fight poverty, which are problems particularly for Roma, Ashkali and Egyptian communities, he said.

Each day, the outgoing government spent around 34,000 euros traveling abroad, while 102,000 people rely on social welfare to survive, said Kurti, and many people in these three communities live on only 80 cents a day. “We will bring this state of affairs to an end,” he said.

Kurti, who has often been accused of pushing a nationalist agenda within his politics, said that Vetevendosje’s aim is to introduce full social and economic reciprocity between Serbia and Kosovo, and that Vetevendosje would prefer to work with Serbs that are not directed by Belgrade, but rather those who plan to protect the interests of the Serbs living in Kosovo. Kurti then repeated his response in the Serbian language, which was applauded by the audience attending the debate.

Vetting processes for the judiciary and investment in the security sector

Kurti promised that the judiciary will have his full support, and will particularly be encouraged to  be more active in tackling economic crime. For him, increasing capacities in the prosecution will improve efficiency and transparency.

Albulena Haxhiu, a former MP in the Kosovo Assembly, said that one of the top priorities for Vetevendosje is improving the vetting process in the judiciary, prosecution and the top positions of the Kosovo Police and Kosovo Intelligence Agency, KIA. Through this process, Vetevendosje would ensure a higher standard of integrity in the justice system, added Haxhiu.

When asked by Xharra about the practicalities of this process, how they would achieve support for it and how they would raise the funds necessary for such vast reform, Haxhiu said that Vetevendosje’s government would give its “unreserved support” to ensure that the judiciary remains independent and efficient throughout the course of its work.

Concerning security, Kurti promised to increase spending on the Kosovo Security Force, KSF, to 400 million euros, which is almost double the current budget.

Kurti also said that he plans to introduce obligatory military or civil service in the KSF for six months for men only. Women, on the other hand, can choose whether or not they wish to contribute. “There are peaceful people who don’t like or may hate guns, so for them, they can perform civil service,” Kurti said.

Education was the last issue discussed during the debate, although Vetevendosje has set education as its top priority. For Kurti’s party, improving physical infrastructure of schools is important, but their key aim is to work on the quality of education provided to children at all stages. Vetevendosje promised that all children will have access to free public kindergartens in Kosovo.

Arberie Nagavci, a former MP, stated that under Vetevendosje’s administration, the plan is to scrap all educational material with errors or discriminatory language. Teachers’ resources will be improved, and Vetevendosje pledged to ensure schools will not lack textbooks and trainings will be given to staff.

Nagavci also said that Vetevendosje foresees 100 talented women that will be awarded scholarships to become teachers, as part of an incentive to strengthen the position of Kosovo women in education.

Vetevendosje also aims to offer free higher education education to all students that excel during high school. Another measure that will be taken is the establishment of a fund for research, supporting researchers hoping to contribute to advancing scientific and academic development, though no concrete amount of money was mentioned in relation to this policy.

Another candidate for a seat in the Kosovo Assembly, Hajrulla Ceku, spoke about the priorities of Kurti’s government in the sphere of culture. According to Ceku, their main priority is the development of local theaters in Kosovo, building an opera house and introducing further support to Kosovo’s National Theater in Prishtina.

A better strategy to protect cultural heritage is their plan, said Ceku, who is a former deputy minister of tourism in Albania, stepping down this year to stand for a seat in the Kosovo Assembly. “Cultural heritage, besides its spiritual side, needs to be used both for development and diplomacy. Together with our culinary richness, our villages and other cultural heritage, we need need to put all these in the service of tourism, and to convert tourism into something that will bring employment and development.”

In their final remarks, Vetevendosje MP candidate Yllza Hoti spoke about policy plans related to Kosovo’s youth. Opening a techpark, a Faculty of IT and spaces for new start up businesses were promised. Around 2,000 grants amounting to an estimated 20 million euros would be offered to Kosovo’s youth to encourage these startups, Hoti stated.

On Friday, the prime ministerial candidate for AAK-PSD, Ramush Haradinaj, will be interviewed for Jeta ne Kosove in the same format. Prishtina Insight will report on each of the prime ministerial debates which will take place over the next three days. All candidates confirmed to be interviewed. However, the Democratic Party of Kosovo candidate, Kadri Veseli, canceled his interview for Jeta ne Kosove, despite previously confirming his attendance.