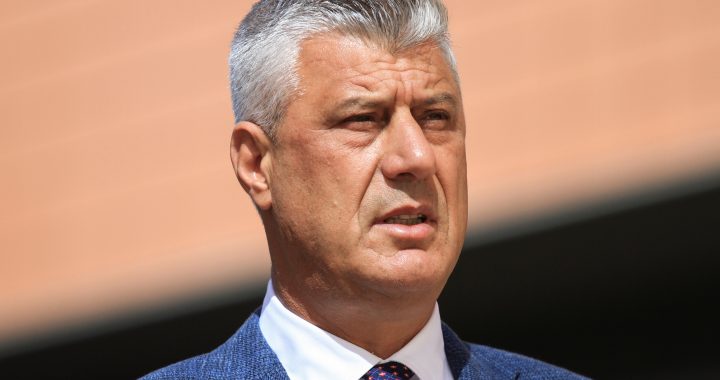 Kosovo President Hashim Thaci called for calm and unity after announcing that the indictment filed against him by the Special Prosecution had been confirmed.

In a press conference on Thursday, Hashim Thaci announced that the indictment filed against him by the Specialist Prosecution Office has been confirmed and resigned from his position as president.

Thaci urged for calm, prudence and unity in light of the news. “The indictment against me and my brothers-in-arms is a small price to pay for the freedom of our people,” he said.

The indictment against Thaci was first revealed by the SPO in June, when it announced that it had filed war crimes charges against the former head of the Kosovo Liberation Army’s political wing.

According to the SPO press release, the indictment contained ten counts of war crimes and crimes against humanity, including charges of “murder, enforced disappearance of persons, persecution and torture.”

Thaci’s announcement followed news earlier on Thursday that Kadri Veseli was stepping back from political duties in order to defend himself from war crimes charges after an indictment from the SPO against him was confirmed.

On Wednesday, former KLA spokesperson Jakup Krasniqi was arrested in Prishtina by EULEX special units before being transferred to The Hague to face war crimes charges.

Rexhep Selimi, a former KLA commander and the head of Vetevendosje’s parliamentary group, later announced that an indictment against him had been confirmed and would travel to the Hague to defend himself against the charges.

Speaker of the Assembly Vjosa Osmani will serve as acting president until a new president is elected by the Kosovo Assembly.