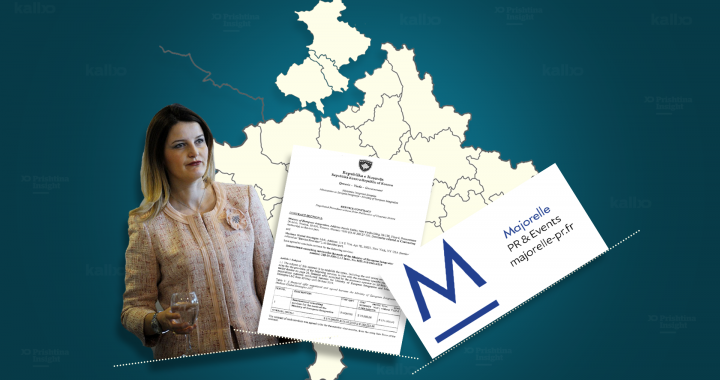 BIRN has discovered that in 2019 the Ministry of European Integration paid 168,000 euros to a Paris-based company that promoted the idea that ‘territorial modification’ could be a solution in the Kosovo-Serbia dialogue.

In 2019, Kosovo taxpayers forked out 168,000 euros to the Paris-based PR company Majorelle PR & Events through the Ministry of European Integration.

According to documents obtained by BIRN, amongst other things the company was tasked with shaping European opinion in favour of what is described as “Kosovo’s position” supporting “territorial modification” as a means to achieve a Kosovo-Serbia peace deal.

The contract with Majorelle was signed and negotiated in 2018 by Dhurata Hoxha, PDK’s Minister of European Integration in the PAN coalition government led by Ramush Haradinaj. This contract was then extended in March 2019.

One of the few tangible outputs received in return for the 168,000 euros was a vague five-page report in broken English that the company addressed to Qendrim Gashi, Kosovo’s Ambassador to France, which is dated 20 September, 2019.

The report states that: “The reopening of peace discussions has been quickly focused on territorial border modification and has put on the table the debate/taboo on possible reconsideration of Balkans’ map…”

It also notes that putting Balkan borders back on the negotiating table was “raising surprise, fear, worry on a renewal of Balkan war,” adding that: “This issue has often been misunderstood and misperceived by French media and politics, seeing a possible reopening of Pandora’s box and a high risk of ‘domino effect’ in the region.”

The company’s report makes it clear that altering borders was the agenda being pursued by its Kosovo client, and that these attempts were not cutting through.

“Kosovo’s position, showing how territorial modification could, on the contrary, serve relations’ pacification and be a way to the resumption of dialogue with Serbia has been inaudible,” the report states.

The report concludes that despite US support and the diminishing of the taboo around the subject in Europe, the window of opportunity for reaching a Kosovo-Serbia deal based on border changes, which had potential in 2018 and 2019, was closing. According to Majorelle, this was due to “internal dissensions and oppositions against peace, the lack of support on both sides…”

The notion of territory exchange was raised by Kosovo President Hashim Thaci, who publicly broached his support for the idea at the 2018 European Forum in Alpbach, Austria, while participating in a panel discussion with his counterparts from the Western Balkans. Asked by the moderator if he was willing to give Kosovo territory away in return for a final settlement with Serbia, Thaci infamously replied: “Yes, I am in favour of border correction.”

However, it seems now that he may have been unaware that a PDK-run ministry in his own government, was running a lobbying contract for “Kosovo’s position” in favour of a peace deal based on border changes.

Dhurata Hoxha, the minister that entered into the contract with Majorelle, is a former advisor to Thaci, and a prominent member of PDK, the party that Thaci co-founded and led until he took office as president in April 2016.

When contacted by BIRN on Wednesday, Hoxha stated that “the [aim of] the contract was to lobby for visa liberalisation but I never looked at the reports that [Majorelle] sent. I don’t know what they reported, that was the job of the [ministry] secretary and the contract manager.”

When asked who the contract manager was, Hoxha said “there are so many contracts in that ministry, I don’t know who oversaw this one.”

A tale of two secretaries

However, judging from the correspondence that BIRN has seen, including three letters to two different secretaries, this was no ordinary contract. Hoxha applied a great deal of pressure to sign the contract with Majorelle PR & Events specifically.

In a letter dated 10 May, 2018, Minister Hoxha asked Demush Shasha, the then-General Secretary of the ministry, to start procedures to sign a single-source contract with Majorelle PR & Events, without entering into a public call as the Law on Public Procurement requires.

Shasha replied asking Hoxha what circumstances could justify the ministry bypassing the public procurement process, and argued that entering into a contract in this way violates “principles that ensure quality, transparency and competition.” In a letter dated 29 May, 2018, Minister Hoxha replied saying “the circumstances are extraordinary.”

“In my daily coordination with the president [Hashim Thaci], prime minister [Ramush Haradinaj], head of the parliament [Kadri Veseli] and Minister of Foreign Affairs [Behgjet Pacolli], we have agreed that we must take urgent steps to lobby and communicate the Republic of Kosovo’s vital interest to decision makers in France and the European Union,” Hoxha’s response to Shasha states.

Shasha told BIRN on Wednesday that discussions about the contract at the ministry began in 2017. “I could see that Dhurata [Hoxha] was under pressure from someone to sign this contract, because she was insisting to sign it with this particular company,” he said.

Shasha added that he researched Majorelle PR & Events and did not discover any particularly famous names from the world of European diplomacy attached to the company.

“It seemed suspicious to me, partly because the minister was asking me to sign this contract without following the public procurement law,” Shasha said. “As a secretary it was up to me to put my signature on these contracts, and I wasn’t going to put my name on something that looked dodgy to me.”

Shasha told BIRN that he wrote to the Anti-Corruption Agency to ask if the procedure was permissible. He said he also wrote to Safet Hoxha, the head of the Public Procurement Regulatory Commission, PPRC, who is now a judge at the Constitutional Court.

“Safet Hoxha came to meet with the minister,” Shasha said. “They both invited me into the meeting trying to convince me to sign this contract as there was ‘nothing wrong with it’ but I left this meeting unconvinced.”

Speaking to BIRN, Safet Hoxha did not deny that this meeting took place and confirmed that letters were exchanged on this matter between the PPRC and Demush Shasha.

Shasha told BIRN he refused to sign both the Majorelle contract, and another contract he described as “dodgy” that involved the ministry paying large sums to rent a building. “I decided to resign from that post a month later,” he said.

A few months after that, Shasha was replaced as General Secretary at the ministry by Kushtrim Cukaj, the brother in law of Hajredin Kuci, a former PDK Justice Minister, and the brother of Fisnik Cukaj, who reportedly was a business partner of PDK-leader Kadri Veseli.

In May 2020, Cukaj was dismissed by the Kosovo Government’s Disciplinary Commission for High Level Civil Service Posts. The government decision dismissing Cukaj lists a lack of oversight of contracts signed by the ministry under Dhurata Hoxha as one of the former General Secretary’s breaches of duty.

The decision also states that the contract signed with Majorelle was in violation of the Law on Public Procurement, that the provided services did not correspond to the services paid for, and that it was not clear how Majorelle contributed to Kosovo’s EU integration.

“This high level misconduct is a criminal act against the public interest,” Abazi said. “It is unfortunate that this has happened, and that the prosecution have failed to protect the public interest. Officials and politicians have treated the state as its private property.”

Asked by BIRN whether he was aware that Majorelle PR & Events promoted the idea of territorial adjustments, Cukaj said that he is not in a position to comment as he has been dismissed from his job, a decision that he plans to appeal.

Dhurata Hoxha claimed that “it is of course worrying if [Majorelle PR & Events] lobbied for border changes, but nobody notified me. Whoever managed this contract should have brought it to my attention because I wasn’t dealing with it.”

BIRN sent questions to Kadri Veseli, the leader of PDK, through party spokesperson Avni Bytyci, asking if he was aware that a minister from his party contracted a company to lobby for border corrections. Veseli was not available for comment.

Questions were sent also to Ramush Haradinaj, the prime minister at the time, through Lulzim Leci, the media officer of AAK. Haradinaj was not available for comment.

BIRN asked Qendrim Gashi, Kosovo’s Ambassador to France whether Majorelle PR & Events had indeed initiated articles in French newspapers that supported border changes in Kosovo, and whether the Kosovo Embassy in Paris had seen these articles or been witness to meetings that lobbied for this.

Kosovo’s Embassy to France told BIRN that it should address these questions to the Ministry of European Integration, as it was the ministry that signed the contract. It “categorically” denied that the Kosovo Embassy to France joined any lobby supporting the idea of border changes.

BIRN contacted Majorelle PR & Events but received no response by the time of this story’s publication.